May 29, 2018: The following post was originally published May 21, 2018 on Left Wing Astrology and is published here by the author's express permission in order to more broadly air the views of a millennial astrologer: 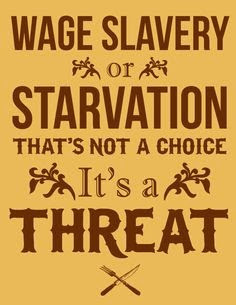 In the big news of the day, the Supreme Court voted 5-4, with Neil Gorsuch casting the deciding vote, in favor of Epic Systems, thus allowing employers to block employees from grouping together in order to fight legal disputes in employment arbitration agreements. This basically makes it easier for employers to underpay their employees, known as wage theft. The reaction to this verdict is basically that it's another step closer to slavery, but to be honest, slavery is already here. Wage slavery.

In the current economic system, in order to maintain a decent standard of living, you basically have to work a 9-5 schedule every day, outside of holidays and weekends, for around 40-45 years until you're eligible for Social Security, which is basically their way of saying that "you're too old to produce reliably for us, so here you go and hope you die soon". If you don't go through that type of lifestyle, it is very difficult to survive, that is, unless you're a celebrity, and you'll notice that there are numerous pictures of celebrities making Illuminati hand signs, just like our elected officials. So that's basically a way of telling people that they need to sell their soul to the Illuminati if they want to have a comfortable life without all the hassle and grind. Where is the freedom in that? This verdict has basically made an already repressive system even more repressive, which will only hasten the end of the system.

Ever since 2008, Pluto has been in the sign of Capricorn, the sign of government and big business. Pluto is known as the transformer in astrology, and surely enough, it is transforming these areas. This transit, along with Neptune in Pisces, is playing a major role in the people wanting a government that works in their best interest. Universal Health Care and Universal Basic Income are gaining major traction, along with free tuition. Self-driving cars are also likely to be in the future, eliminating the need to pay oil companies in order to travel. The Stoneman Douglas High School activists' push for gun control is exposing the GOP's favoritism of money from the NRA over children's lives. Pluto is doing its job, but as expected, the people in power are becoming more repressive in order to maintain their power. Nobody is able to defeat astrology in the end, though, especially when the transit has yet to reach its peak, with the US undergoing its Pluto return in 2022. This is basically telling the country to transform, or else Pluto will do it for them. Also, with the Pluto in Sagittarius generation starting to come of age, by then, the Pluto in Libra, Pluto in Scorpio, and Pluto in Sagittarius generations will be the majority of the voters at that time, and all three of these signs are in the second half of the zodiac, which had more to do with the collective, rather than the individual like the first half of the zodiac.

This exposes Trump as part of The Establishment

Trump's campaign was all about him being anti Establishment and "draining the swamp", despite him being exactly what we're fighting against, and his actions since becoming President have been anything but anti Establishment, as he has numerous Establishment Republicans in his cabinet, such as Jeff Sessions, Nikki Haley, Rudy Giuliani, Ben Carson, and Rick Perry to name a few, and he has been more pro corporation than any other President since Reagan. Trump picked Neil Gorsuch, who was approved by the GOP Congress. This exposes Trump as being part of the problem, and a big part of the problem at that, rather than a solution.

In turn, this verdict didn't push us closer to slavery, but it made the wage slavery we already have more oppressive than it already is. All I can say is that this is just another reason I'm grateful to NOT be a taxpayer, as it must be very self defeating to send your tax dollars to these people every year so they can screw you even more. Hopefully there are tax revolts soon, as it would be impossible to arrest everyone if a significant majority of people refuse to file out of protest. We the people need to send a message that corporate welfare will not fly anymore.

Thanks, Kevin, for sharing your views! Readers may note that Illuminati hand signals (aka, symbols) Kevin mentions are quite revealing such as the 'OK" sign that Donald Trump flashed repeatedly during his 2017 Inaugural speech and continues to use often when pontificating. This may not be curious since Trump's Leo Ascendant with royal Regulus rising, star of 'the king' or 'the kingmaker', echoes the 'OK" signal which is said to be the sign of 'the divine king' for that is obviously what he considers himself to be as he works to undermine America (just like Putin would do!). Of course, 'Regulus rising' is the case if Trump's hour of birth is accurate! Jude