The Powell Memo: a Genesis of Corporatism in Control

Astro-Notes: The Powell Memo and Corporations as 'People' Like Donald Trump

The significance of the Powell Memo (or, Manifesto) cannot be overemphasized when pondering the ongoing assault on American institutions by corporate interests, transnational and domestic. It is not the first or only assault but one of many by wealthy elitists of the anti-Constitutional kind, those opposed to democracy and who plunder resources and wage wars across the globe and at home for their own profit.

Naturally, the term 'manifesto' must conjure for us the Communist Manifesto and the anti-worker doctrine of Marxism which has been shown to have been invented in order to destroy the Middle Class--invented though plagiarized by Karl Marx who was financed by the wealthy class of his day including his wife's family, the von Westphalens of the Prussian aristocracy.

So with no precise hour known, I'm finally getting around to publishing a 'noon' horoscope for The Powell Memo: 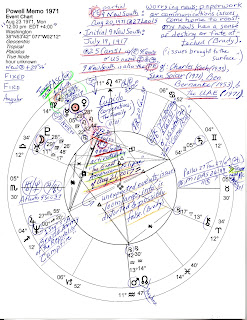 As you see, the Memorandum occurred within a 9 New South Saros Series with its Solar Eclipse ('PE') @27Leo15 which was activated on August 21, 2017 by The Great American Eclipse whose path of visibility split our nation in half. You'll remember that this is the Total eclipse that Donald Trump looked at 6 times without safety glasses--and its degree conjoined his natal Ascendant (29Leo) and by extension, his rising Mars (26Leo). Themes of the 1971 Solar Eclipse are messily penned upon the above chart along with the themes of the August 2017 Eclipse in the 1 North series, the 'Mother of All Eclipses' of Nostradamus fame (August 11, 1999 @18Leo).

So far, the Trump regime has fulfilled 1 North's themes extremely well: 'unexpected events' and 'information is distorted and possibly false'. Plus, we should note that the August 1999 eclipse will be activated by another Solar Eclipse this very year on August 11, 2018 @18Leo41 in the 2 New North series, the eclipse I have unhappily labeled The Tower Eclipse for its 'collapsing tower' and 'rebuilding' themes (Brady). This eclipse happens to be the Prenatal Eclipse of the 2018 Midterms.

Now as you know, history is often said to rhyme (if not repeat precisely) and it seems to me that the study of eclipses, solar and lunar, is one way of revealing 'time links' between years and the historical events that were influenced by the applicable eclipse themes. This does not discount whether or not a particular eclipse is visible in a certain location where an event takes place yet the significance and symbolism of eclipse degrees are my primary focus along with the themes of the series in which an eclipse falls. Of course, visible eclipses would have stronger influence upon events as would Total eclipses but degrees are sensitized by eclipses, stars, and other factors and remain so through centuries.

As for the Powell Memo horoscope itself, its lack of timing prevents a full consideration here although there are a few chart factors I wish to point out:

First, that Neptune, planet of fraud, corruption, propaganda, disguises, get-rich-quick-schemes (with nearby Jupiter), the (corporate-controlled) media and the masses, is @1Sag, a degree with a Sabian Symbol (penned on) well known for its link to the US military--in America's case, to the military industrial complex that's bleeding America's National Treasury dry at the expense of We The People.

Another factor is the midpoint of Pluto-Chiron, the Plutocracy pair of oppression, exploitation, primal violence, racism, and other -isms such as Capitalism, Communism, Marxism, Bolshevikism, Fascism, Socialism, and Zionism, which conjoins US natal Jupiter (5Cancer56) with its enlightening Sabian Symbol for '6 Cancer': "Game Birds Feathering Their Nests." In the Powell Memo chart this would refer to Mr. Powell and his Chamber of Commerce co-conspirators and others of the corporate persuasion--and to America's Founding (plutocratic) Fathers of 1776 and our modern-day financial fanatics who exploit others at every opportunity and have pulled a major scam with their ridiculous assertion that "corporations are people, too" (codified by Citizens United 2010). In the same vein, SCOTUS Justice Neil Gorsuch wrote an opinion about two days ago siding with employers and corporations over US workers, so there, America. Scr*w you, say corporate elitists.

And for those of us who use a late afternoon founding chart for America (July 4, 1776), its Ascendant in the range of 11-13Sag was the spot in the Zodiac where Pluto and Chiron last met in conjunction December 1999--and helped usher in the dawning of the New Millennium under the auspices of the 'Mother of All Eclipses', the 1 North @18Leo which will soon be triggered in August 2018.

Donald Trump in the White House: the Corporate Tradition Carried On 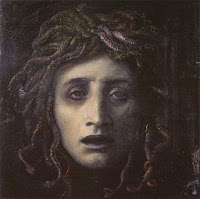 And finally, let's close by noting that in 1971 the asteroid of ethics and strategy, Pallas @27Tau27 opposes 1971 Jupiter in corporate Scorpio while conjoining 1971 MIDAS (26:49) -- and greedy MIDAS happily sits upon the natal Midheaven (The Goal) of gold-lover Donald Trump (age 25 in 1971). And that's Trump's very visible MC where the nasty, malevolent star of violence, rage, and viciousness is found: Algol of Medusa's Head fame.

Now in case either of you need it, here's what some say is an apt description of the Trump regime by Dr. Lawrence Britt; this controversial definition is also known as The Britt List.

Plus, every chance he gets Trump Is Using 'The Big Lie' Tactic Invented by Goebbels, a post which includes some Astrology and an interesting video.

A Possibly Related Post: 4 Virgo and the Midpoint Pictures of Trump and Hitler...some weird cosmic synchronicity is going on.