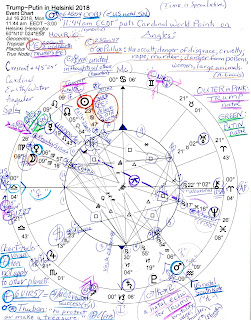 Based on Donald Trump's dismally dropping support among Midwestern voters some pundits are saying that the Trump-Putin 'Summit' in Helsinki, Finland with its anti-America flavor was a turning point in Trump's popularity if not his White House tenure. Is Trump's mojo wilting? we might ask. Did it have far to fall in the first place? Are tall towers phallic enough for him?

Well, I posted on the Helsinki 'summit' at the time as Trump reporting to Putin and sad to say, nothing has occurred or been said since that changes my personal opinion as an American on the unacceptable circumstance of Trump sucking up to Russia's Putin. If you wish, follow the Trump-Putin link, above, for astro-notes on the horoscope you see re-posted here. And keep it under your babushka that no matter how Trump and Putin behave or what they say, Putin's long-term plan to collapse the USA is on-track and thriving with a compromised Donald Trump in the White House and the white supremacist Republican Party all-in on the global government game.

For as we saw with transit Pluto recently reaching the 1993 Uranus-Neptune Conjunction degree of 18Capricorn (NWO/POLITICAL POWER: smug or strong-armed paternalism--Jones) under Trump, 'the big picture must be followed, very little option to do otherwise' (Tyl). This makes me wonder who's Putin's boss behind the scenes! Does the name begin with Rothschild?

Pathetic and sad for you to still believe that Trump is “compromised” more than a year after millions of wasted taxpayer dollars could not produce one iota of evidence of that for Mueller. Hon, you may need to change course and somehow accept that Trump is improving our nation and world- most others have! Get a life.