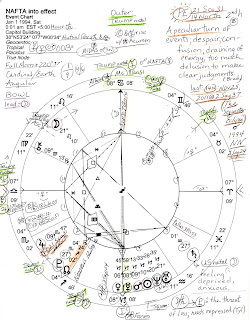 Asteroid MIDA$ conjuncts the Saturnian South Node in 8th house of Corporations, Credit, Debt, and Shared Resources which suggests that king Midas has done such mischief before.

Syzygy Moon (last lunation) @7Can14 conjunct MC; Prenatal Solar Eclipse ('PE') @21Sco31 in 2nd house of the National Treasury and Values in the 14 North Saros Series; eclipse themes: a peculiar turn of events; despair; confusion; a draining of energy; too much delusion to make clear judgments (Brady); last manifestation of a 14 North Eclipse: November 25, 2011 @2Sag37 (conjunct NAFTA's North Node 2Sag24!) as what I termed at the time the sinister 'Sequestration Eclipse' (during the 'Super Congress' charade when all those across-the-board budget cuts were supposed to rescue the US economy; as you know, the 2011 military cuts didn't last).

Around the Foundation of the NAFTA agreement (IC) are a stellium of planets in business-and-government-oriented Capricorn, ruled by Saturn which squares Pluto (harshness, cruelty; destruction of the established order--Oken) in the corporate sign of betrayal, Scorpio, both planets at 27 degrees (karmic). The New World Order (global government) pair, Uranus and Neptune are just parting from their three conjunctions of 1993 @18Capricorn ("POLITICAL POWER") where transit Pluto has hit off and on of late (on at the moment) with its 'Big Picture must be followed' command issued by manipulator Pluto, the saboteur and wealth-hoarder. Plus, NAFTA Pluto conjunct North Node is the 'tiger by the tail' pairing of power.

Two fixed stars are prominent: Alhena at MC, the Goal Point; the star's theme: to have a mission. At IC and conjunct Mercury is Facies (ruthlessness or the victim). Ruthless is how the trade agreement was handled by its promoters and enablers, victimized is how most of We The People felt at its passing and implementation. And who can forget presidential candidate Ross Perot's much ridiculed remark at the time that passing NAFTA would result in the "giant sucking sound" of US jobs leaving the country and the economy. Ridiculed because it was true.

Then (bottom right) is NAFTA Saturn conjunct US natal Moon denoting feelings of deprivation and anxiety, and the T-Square between the Moon-Saturn opposition pointing toward Pluto = the threat of loss; needs repressed (Tyl); elimination of support for families (Munkasey) which, if memory serves, describes the mood of the times when NAFTA was passed by Congress against most Americans' better judgments and our sense of betrayal. But Congress didn't listen to the American people then any more than it listens now and our feeling of betrayal continues.

So now Mr. Trump (who may remember 1993/1994 himself) knows that NAFTA wasn't popular with the American people back in the day nor with him apparently (Mercury-Mercury opposition) but unfortunately for our nation and the other nations involved, his particular style of tinkering under hoods promises chaos, superficiality, and fluff more than actual improvement. Awkward!

Related from 2016, here's a Thom Hartmann segment asking How Do We End the So-Called "Free" Trade Deals?