Update August 28, 2018: the September 17th trial of Paul Manafort will proceed as scheduled with jury selection, however, opening statements are postponed for one week until September 24th.

Uncertain of the precise hour the trial of Paul Manafort opens on September 17, 2018 in a Washington DC courtroom, the following horoscope is set for '8:00 am edt' and as you see, the Midheaven ('MC'), or Goal Point, at the top of the chart @8Can34 shows the natal Mercury of Donald Trump crossing over it at that moment. Fixed star Alhena is there as well with its theme, to have a mission. Might the mission have anything to do with Trump's chatty if duplicitous Mercury? More likely with Mr. Manafort's knowledge of the Mercurial Trump's 2016 campaign.

Rising at 8:00 am is 7Lib32 which makes Venus chart-ruler yet she makes no applying aspects at all to clue us in on how things will proceed. Or does she? With no application of the chart-ruler, we must depend on Venus' sign, degree, house placement (2nd h of Money, Values, Possessions), and house ruler-ship to tell the tale. Here, with Venus in brooding Scorpio, sign of corporations, money, big business, and betrayal, we find the Sabian Symbol for Venus' degree instructive: '6Scorpio' = "A Gold Rush"...AMBITION with its negative expression of "a lack of practical discrimination and an irresistible desire for easy money." (Jones). Considering the allegations against unregistered 'foreign lobbyist' and money launderer, Mr. Manafort, this seems clear enough, right? Plus, Venus also rules the corporate 8th house of Finance, Shared Resources, Credit, and Debt via Taurus, the luxury-loving sign of Paul Manafort's natal Moon. Yes, luxury, comfort, money, and possessions are his reigning needs (Moon).

Then there's Mr. Trump's natal Cancerian Mercury at Goal Point--Mercury, planet of communications (ex: tweets), commerce, trade, theft, deals and negotiations--in Cancer, sign of patriotism, shrewd business ability, and self-protection, so we may expect Paul Manafort's knowledge of Mr. Trump's words, plans, deals, and 'patriotism' to be part of the legal proceedings if Trump's name comes up at all. Possibly it will in relation to the events, contacts, and negotiations which took place at RNC 2016 as foreign actors lurked about: 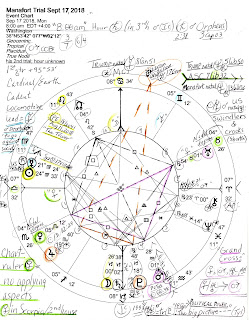 Please enlarge the image to read my scribbles for not all chart factors will be mentioned in this text; besides, the trial date could possibly be changed again or the proceedings could begin at noon or later--at noon, Scorpio rises which would emphasize Mars conjunct POTUS Sun, square Uranus (0A26; danger; explosions, and Mars, here out-of-bounds (OOBs), soon to be conjoined by the transiting South Node of the Moon, aka, The Tail of the Dragon (as will the POTUS Sun 00AQ48, a separative and karmic Saturnian condition--see Tail of the Dragon Smacks POTUS Sun!) in late October 2018. Popularity with the public is not promised by this transit.

So as you see, 8:00 am edt is an Hour of Saturn, perfect for legalities and for holding the innocent-until-proven-guilty to account. Upper right of the chart I penned the ASC 7Lib32 to show that Trump's natal Neptune (5:50 Rx) is rising, then Manafort's natal Neptune (13:52 Rx) about to rise. The Sun-Mercury midpoint (business people) of this chart sits upon America's natal Neptune (23Virgo) which provides a cosmic picture of swindlers and crooks (Ebertin). Homegrown ones, I guess. Anyway, at the Foundation (IC) of the chart, the Moon at a Cardinal World Point) pairs with Saturn conjoins asteroid Orpheus so cue the violins for the emotional heaviness that pervades. Yet the Moon-Saturn duo can also denote ambition and strategy especially here in Capricorn.

This is a first quarter Moon phase (crisis in action) but what really catches my eye is the Locomotive shape of the planets (ruthless success) led by little Mercury @21Virgo--conjunct fixed star Denebola (to go against society). Mercury is oriental (rises just before the Sun) and in the 12th house of Politics, Karma, Self-Undoing, Secret Enemies, and Backroom Deals. And of course, Sun in 12th house denotes unconscious arrogance and with Mercury oriental it's predictably a 'cross the Ts dot the Is' sort of day.

Paul Manafort's natal Mercury at Aries Point (00:04) is in process of being visited by transit Chiron (the wounded healer, the wound, the blind spot) suggesting him as a conduit of some sort for sending messages. Then his natal Venus @7Ari42 is setting for the vengeful-when-scorned planet sits precisely on the Descendant at 8:00 am--with his natal Mars @8Ari21. With this pair, are love affairs or other liaisons indicated? Or merely irritability, exaggeration, and possibly a lack of tact? (Ebertin).

Now striding across the chart is a Grand Cross if we allow the Nodal axis to take part. Otherwise, it's a double T-Square between the Venus-Uranus opposition that points toward Mars @1AQ28--and US POTUS Sun (in 2017, Sun @00AQ48 = Trump) on one end, and Venus-Uranus = North NOde on the other. Quick responses and intense feelings are suggested. Plus, someone is 'ready to go' and 'proud' (POTUS Sun). Of course, another picture is shown--Mars-NN = Uranus which denotes potentials for upsets and sudden experiences, but also for active cooperation. Then Venus opposite Uranus adds collaboration to the Mars-Nodal picture. But surely not the flipping of Paul Manafort! Probably just the legal teams involved in the investigations and the trial.

And naturally, there's a notation at the bottom of the horoscope with saboteur and wealth-hoarder Pluto @18Cap48 Rx again intensifying the 1993 Uranus-Neptune conjunction/s (18Cap) which forms a midpoint picture of 'the big picture must be followed; very little option to do otherwise' (Tyl). Sounds like an offer someone can't refuse. The Sabian Symbol for this degree describes POLITICAL POWER and, negatively, 'strong-armed paternalism' at its 'best' (by which I mean worst) and here in 4th house, the Basis of the whole shebang.

And we mustn't neglect to mention the Jupiter-Pluto sextile (plutocrats; big wheeler-dealers--2nd h of Money, 4th h of Real Estate) which forms a temporary YOD (crisis; turning point) with Trump's natal Uranus-NN-Sun trio which is marked in orange in the 8th house. As a midpoint picture, this suggests Mr. Trump's tendencies for quick exploitation of every situation, far-reaching associations, possible adjustment to new circumstances, fanatical striving for improvement, and political activities (Ebertin). As a YOD the pattern can act as a timer for major adjustments which must be made so that a complete change of direction is facilitated. If the energies are poorly handled, results will be negative for Mr. Trump.

Well, there are many more cosmic clues in the chart and in later charts of the day but since I try to avoid typing too much about a horoscope for which I have no exact hour, I'll leave you with this spotty analysis until and unless the hour the trial begins is discovered causing the different house cusps to change to a large extent so that any of the portents mentioned in today's post don't hold. Or if there's a delay in the court calendar.