On October 27, 2018 transit South Node ('Tail of the Dragon') 'smacks' the 2017 POTUS Sun 00AQ49:53 for just under 3 minutes from 6:50 am edt to 6:52:50 am edt. The horoscope below is set for Washington DC at the first minute of this conjunction; the transit may have no significance at all but is posted here for the sake of recording the cosmic event--and because of the tribulations of the Trump administration since he 'took office' at noon on January 20, 2017 at noon est with an isolated 10th house Sun that represents, since Inauguration Day 2017, thespian Donald Trump in the leadership role.

Obviously this particular nodal transit also occurred approximately 19 years ago while Bill Clinton was in office, his second term ending on January 20, 2001. Embroiled in legal, political, and personal battles, Mr. Clinton's White House experience resembles on a basic ethical level that of the embroiled Mr. Trump, as you know, and although SN to Sun is a cosmic event of brief duration, perhaps its Saturnian vibes of separation and lack of resonance with the public (or with the public mood or societal trends) returns in 2018 for the American people's further dealing in the inflated form of ethics-challenged Donald Trump. Both planet Saturn and the Nodes of the Moon are considered karmic (what was sown is reaped) and both play roles in the element which only Astrology can provide the seeker--timing. 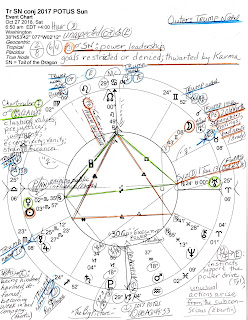 Now since it's America's POTUS Sun involved ('President of the United States'), the US presidency will be 'smacked' or 'swiped' in some way along with the man playing the archetypal role in October 2018; therefore, the Presidential Oath of Office will be involved. This brings Trump's affirmation to preserve, protect, and defend the US Constitution into this Saturnian picture with its 'separation' theme. Agreement that Mr. Trump is actually doing the required job in the required way is hard to find unless you look toward the morally bankrupt GOP and their billionaire enablers who are determined to re-write the US Constitution in unrecognizable ways. Plus, Trump's mesmerized supporters, who at this typing, remain devoted to his quirky, eccentric, chaotic Uranian way of doing things, tradition be da*ned. For after all, Trump's natal 10th house Uranus in mutable Gemini (sign of duplicity, variety, tweeting, and gossip) is his guiding planet because it rises just before his Gemini Sun (aka, 'oriental').

And if we look to a South Node/Sun conjunction in general for clues to what may be involved in late October, we find circumstances, conditions, and people continuing to block and limit Trump's self-expression, leadership, and power potential. Obstacles via others litter his path of achievement to the point that aims may be denied altogether. That Trump has and does promote his own selfish aims at the expense of others--aka, exploitation--complicates the situation for SN-to-Sun is a doubly karmic event in which current actions are thwarted by pipers who rightfully demand full payment. You've probably noticed how Mr. Trump has demonstrated an alarming lack of self-discipline and an inability to control his primal urges which do not sync with Saturn's requirements which can lead to positive outcomes and best results.

And of course, astrological Saturn is the taskmaster bringing lessons of limitation, restriction, and accountability (The Establishment in the form of Mr. Mueller?!) but as we know, Mr. Trump has shown himself to be learning disabled concerning most topics, and a know-it-all to boot. In fact, he has stated that he's never asked for forgiveness because he's never sinned or made a mistake--quite an unsullied 'god' he imagines himself to be! Perhaps having royal Regulus rising along with asteroid Apollo (the 'sun god') inspires such a misconception about himself as being superior to the rest of humanity. Yet in his role of US president, and allegedly accountable to the American people and to the laws of Saturn, it may soon be time for cosmic comeuppance for such hubris as that belonging to the very flawed Donald J. Trump.