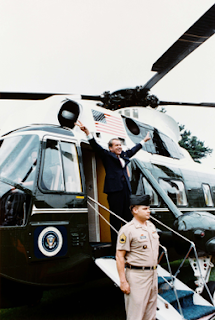 August 9, 2018: Forty-four years ago today, Richard Nixon resigned from the Office of the Presidency in order to avoid impeachment and the parallels between Nixon's actions in the White House and those of Donald Trump are revealing. Perhaps you've seen today's CNN segment with John Avlon pointing out the similarities between the two men--up to the point where Nixon resigned. Editor-in-chief of The Daily Beast and a CNN political analyst, Mr. Avlon is the author of Washington's Farewell which yours truly is currently reading along with several other books, a habit I can't seem to break because I don't want to.

As we learned 44 years ago, resigning from the presidency is an easy task as evidenced by Nixon's resignation letter sent to Secretary of State Henry Kissinger which may be viewed here. In a SO'W post of August 4, 2007, I included a link to the letter and some natal details on Nixon himself noting that his Sun Cap-Moon AQ personality blend suggests a very descriptive 'Image for Integration' concerning Mr. Nixon's presidential destiny:

"Having struggled unaided to the peak, a mountaineer hitches a ride on a passing helicopter." (Sun-Sign Moon Sign, Charles and Suzi Harvey).

Perhaps you agree that the 'struggling' and 'hitching' are exactly what Tricky Dick did thanks to his 'fall from grace' which can be astrologically associated with taskmaster Saturn in 10th house or near Midheaven. That's because law-abiding Saturn, planet of The Establishment and the status quo, demands that human beings abide by laws and rules, honor worthy traditions, wisely administer their responsibilities, and stand up when accountability comes to call. Past mistakes that are never made whole eventually overwhelm when karmic Saturn's imperatives are neglected.

Yet power-mad control freak Nixon was born with Saturn @27Tau29 in his 9th house and power-broker Pluto in late Gemini--also a karmic planet--in his 10th house of Career, Public Status, and Aspirations so that the planetary pair of hardship and severity straddle Nixon's natal MC (Saturn-Pluto = MC). And now, with Mr. Trump under siege and hunkered down in the White House--and many of the 'best people' he hired turning out to be crooks--we shall note that Nixon's natal Saturn conjoins the natal MC of Donald Trump who was born with the nasty star of rage and violence Algol at Midheaven. And this is how Donald 'Algol' Trump is seen by the world (MC). Then significantly enough, the next Great Conjunction of Saturn and Pluto @22Cap46 on January 12, 2020 precisely conjoins Donald Trump's natal Vertex, a point of fated encounters.

Another interesting chart factor is that, assuming Trump's birth data is accurate with a birth time of 10:54 am, royal Regulus rises, a star carrying a serious imperative of its own: 'success if revenge is avoided; if not, all that has been gained will be taken away.' Why, 'revenge' is what exactly Donald Trump loves to take--just like Nixon did! Did I hear you say 'enemies list'?

Plus, there's yet another link between Donald Trump and the Nixon administration and resignation which you can read about in a previous post Trump and the 1973 Eclipse of the 'Saturday Night Massacre', a popularized term for Nixon's firing of the Special Prosecutor investigating him--you know, like Trump longs to do to Mr. Mueller (a vengeful firing which would not stop the investigation).

Now do any of these markers and cosmic links signal in America's future a Trump resignation as he treads the Nixonian path? We must wait and see!