The Long Shadow of Neptune in Pisces

On December 17, 2018, former FBI director James Comey delivered bracing remarks concerning the failure of Republicans to stand up and speak the truth, and their role in the undermining of the rule of law in this country by supporting Donald Trump with nary a murmur of dissent. Undermining Neptune at work!

Following this came former Republican congressman David Jolly's recent comments to Brian Williams on his The 11th Hour program who stated that, "History's going to cast a long shadow over Republicans..." for their weakness and lack of upstanding behavior during this time of American crisis. So here again is the horoscope of the fifth of five Returns of Neptune to its shady position (14Pis01) in the 1854 founding chart of the Republican Party, details following: 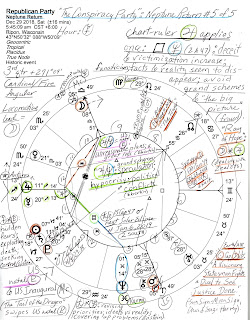 GOP Neptune Return #5 December 29, 2018 5:45:09 am cst Ripon, WI; Neptune returns for the fifth and final time to the exact position it held on March 20, 1854. In Ripon the MC = 5Lib49 conjunct the natal Neptune of Donald Trump, his natal Chiron, then natal Jupiter Stationary @18Libra; rising in Ripon is 13Sag24. Here's another view of the GOP's Ripon Neptune Return Horoscope with chart details.

However, as an update, please note that the following details concern this chart relocated to Washington DC and is composed with the advantage of hindsight from my original post: Hour of the Moon (changes, fluctuations, publicity) which leads a Locomotive shape of planets (ruthless determination toward success) from the 9th house (Philosophy; Legal Matters; Foreign Lands). Is this leading Moon the America public? Or is this Speaker of the House Nancy Pelosi? Or even Trump with his lunar issues? Perhaps all three? Surely it doesn't denote Putin and his undermining minions!

Whatever the lunar case, the natal Moon-South-Node conjunction of Donald Trump rises (21--23Sag) with his quirky, chaos-loving Uranus-North-Node-Sun trio setting; ASC 26Sag58 makes Jupiter chart-ruler and Jupiter @11Sag14 in DC (conjunct US natal ASC 12Sag) is in the 12th house of Politics, Karma, and Self-Undoing. Chart-ruler Jupiter applies only once--to a square with the GOP's Neptune which is posited in the 2nd house of Values yet conjoins the 3rd cusp of Communications (14Pis12) in the Placidus House System. Republicans expressing Jupiter-square-Neptune values are they?

Well, a Jupiter-Neptune square (ruler and sub-ruler of secretive Pisces) identifies the current delusions, illusions, pretense, deceptions, inflation, speculation, schemes, disguises, sabotage, propaganda, and fraud ongoing from and by the Republican Party and its under-fire leader, Trump. The square also points to the disappointment and losses of society via the GOP-Trump-Putin campaign to undermine the US government. My feeling is that whatever happens to Donald Trump resulting from his legal troubles, saboteur Putin has 'won' in his take-down of America--and mitigating the damage is what most American must hope for along with the rebuilding of our institutions which must occur once the dust settles. Best outcome from this saga is that America will emerge stronger than before! Of course, undermining of structures is an effect of the current Solar Eclipse, 'The Tower Eclipse' @18Leo41, which perfected on August 11, 2018 with themes of collapse and rebuild (Brady).

We also see the eclipse's influence via yesterday's court ruling against the Trump 'charity' Foundation now collapsing under the weight of its own illegal funny business as the judge ordered it to dissolve a la Neptune and distribute its remaining funds to actual charities. As you know, the gentle side of Neptune approves of and promotes compassion but in Trump's case, the enforced kind must suffice.

Now as you know, this first-ever Neptune Return of the Republican Party has been ongoing since 2017 but the horoscope above shows Neptune's last exact conjunction, as noted, which repeats its natal aspects of 1854 and reflects the planet's fraudulent, undermining, disappointing qualities affecting society and which now "cast a long shadow" over the Party of Trump, as Mr. Jolly says of history. ('Jolly' suggests a Jupiterian figure!)

And the Sabian Symbol for the GOP's natal Neptune in shady Pisces, now activated under a bright spotlight? "A Lady in Fox Fur"...'negative expression: "amoral opportunism"' (Jones), a trait which Donald Trump, operating from the Oval Office, now shows he shares with Republican Party members on Capitol Hill. Yes, Neptune's mask has slipped! But will we hear about it on Fox 'News'? Lately it seems that's a 'maybe'.

Oh and btw: in DC Trump's natal Jupiter conjoins the Midheaven (18Libra) (the most visible point in a chart) which denotes their shared value of pursuing financial and political gains above all else. And there's the natal Jupiter of Nancy Pelosi (18Aries) at the IC, The Basis, of the chart just in time for her gaveling-in on January 3, 2019 as she and Trump face off on Jupiterian issues such as budgets, deficits, and border wall building.

Also see the horoscope of 'The Tower Eclipse' with Pluto Unaspected (as is the natal Pluto of Donald Trump, a man 'overshadowed by shadows').