2018 Midterms Over: Horoscopes of Trump vs Pelosi

Due to yesterday's 2018 Midterm Elections in which the Democrats won control of the House of Representatives, in early January 2019 Nancy Pelosi (RR: X for time unknown) will become Speak of the House, the first woman in US history to do so. Meanwhile, Oval Office occupant Donald Trump is said to be quite happy with this arrangement and, as an old friend of Nancy Pelosi (and of Chuck Schumer), called her last evening with congratulations. I shall leave it up to you to decide whether or not their tenuous association will mitigate Trump's usual vicious insults, fibs, and jabs, plus, with the new 116th Congress in 2019, Trump will have a wider field of lady politicians to take aim at while he's fighting off subpoenas, very inconvenient questions, and investigations led by Democratic Committee chairs.

Now since Nancy Pelosi's natal chart is untimed, noon is used to set up a bi-wheel of Donald Trump's timed natal chart (inner) with Pelosi's planets surrounding; her Prenatal Solar Eclipse ('PE') in the 14 North Saros Series is included with its themes penned on, lower left, and as you see, 14 North is the series of The Sequestration Eclipse of November 2011 (era of the 'Super Congress' which was 'a peculiar turn of events' concerning 'unexpected financial happenings'--Brady): 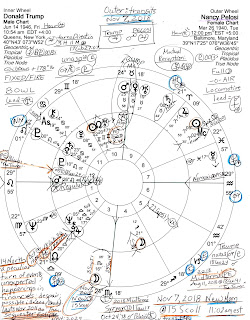 Included on the image are a few basic chart factors, more for Trump since his birth time is known. Highlighted in blue around the chart are the approximate positions of today's planets (November 7, 2018). Please enlarge the chart if you dare read my scribbled study notes. Following are a few major planetary links between Nancy Pelosi and Donald Trump in more or less order of prominence, plus a few mentions of current transits to Pelosi's natal planets:


Pelosi natal Mars @25Taurus conjunct Trump natal MC with raging Algol conjoining both (no smooth sailing between them there especially when his career is affected!); her Venus @20Taurus attends his MC as well suggesting the use of diplomatic negotiations and hinting at the involvement of financial and relationship issues, possibly with a nod to allies or foreign involvements and/or travel (9th house);

Pelosi Jupiter @17Aries closely opposes Trump's natal Jupiter @17Libra (more conflicts--over ideals, politics, and finances--also note that her PE @18Libra36 'eclipses' his natal Jupiter in Libra which tends to harangue, "it's not fair!"; perhaps her 'fury level' is as formidable as his); this opposition will probably result in both of them being quite unimpressed with one another.

November 7, 2018 transits to Pelosi planets include: disruptive Uranus conjunct her natal Saturn @00Tau44 suggesting changes and altered circumstances in the realms of Saturnian authority and leadership, plus, new methods for handling responsibilities. Obviously, her upcoming Speaker of the House position is involved and it didn't hurt during the Midterm Elections that the Syzygy Moon (last lunation) prior to November 6, 2018 was the October 24th Full Moon @1Tau13 which reflected upon Nancy Pelosi's natal Saturn, planet of authority, and was sparked by the aforementioned transit of electric Uranus to her natal Saturn in Taurus!

Another stand-out transit is the Jupiterian North Node of public contact and future direction pointing toward Pelosi's natal Pluto @00Leo40 Rx which is the "tiger by the tail" combo and shows a period for her when power and control are on the upswing and meetings ('NN') with 'the powerful' (Pluto) occur.

Now here are dual horoscopes of today's New Moon @15Sco11 and the upcoming Full Moon of November 23, 2018. Plus, you may wish to check out a previous post in which the Sun Aries-Moon Scorpio personality blend of Nancy Pelosi is considered.

This will be Pelosi's second stint as Speaker.