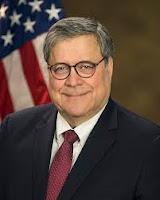 Assuming that AG Bill Barr (a Sun Gemini like Trump!) releases a redacted version of the Mueller Report tomorrow morning (Thursday April 18, 2019), a quick peek at tomorrow's planetary positions reveals a couple of interesting transits to the Mueller Report submission planets of March 22, 2019.

BR Neptune conjunct MRS Mercury (in secretive Pisces) suggests potentials for covering up or veiling the report in order to confuse issues (or deep-six them), deception, erroneous conclusions, and/or mysterious communications.

BR Mercury conjunct MRS Sun indicates potentials for strong and dramatic expressions in a forum (the public discourse? in congressional committees?), hiding difficult conclusions, taking the ideas of others and adding your own (Barr's) input to create something entirely different (the goal of Trump's man Bill Barr as was his earlier "summary" letter/s that allowed Trump the opportunity to brag about being "exonerated").

This transit info sounds accurate to me, how about you?

Plus, there are the increasingly harsh energies of the Saturn-Pluto duo in process of aligning for their January 12, 2020 Great Conjunction and now oppose Trump's watery natal Saturn (authority; accountability; limitations) in Moon-ruled Cancer. As previously discussed, the Saturn-Pluto conjunction when exact @22Cap46 will conjoin the natal Vertex of Mr. Trump, a sensitive point of fated encounters. Significant? Karmic setbacks? Both? We'll see.

And perhaps a midpoint picture involving the planet of reports and communications is revealing of current events for it forms tomorrow...Mars-Saturn = Mercury: loud shouting at formal speeches (Munkasey); bad news; separation; bereavement; murderers (Ebertin)--surely murder doesn't turn up in the Mueller Report!!? If so, that would be something worth hiding at all costs. Additionally on April 18th, the transiting Mars-Saturn midpoint conjoins the March 22, 2019 Sun (1Ari55): inability to meet all demands or master all situations; weak vitality; death or illness of male persons (Ebertin).

Now data for both horoscopes are listed, below, if you haven't already set up the charts and looked for more transits that apply to the Mueller Report Redaction situation once it drops tomorrow-if tomorrow! will its edge be softened by dropping just prior to the holiday weekend? I used '12:00 am edt' for April 18th but perhaps we'll have a definite hour of its release once it's done.

And to paraphrase one of the political truisms I always go by (even if FDR didn't say it as has been asserted through the years)--that whatever happens in Politics is meant to happen for nothing in Politics happens by accident (note that astrological symbols and signs are found embedded all over Washington DC--and that Astrology adds the element of Time and timing to any circumstance, in 1776 and in 2019). This follows along with the political use of the Hegelian Dialect: create chaotic problems then offer the solutions you wanted all along. To me this a large part of Why Trump As POTUS--to create chaos and massive problems so that Americans and the world will accept whatever draconian 'solutions' the puppet masters of the Universe decree--perhaps with Trump continuing as their shill and instigator or perhaps with some other raptor-brain of low character.

Now as you know, the Sun conjoins quirky Uranus (Trump's 'guiding planet') on Monday April 22, 2019 @2Tau31 and when we round up the conjunction's degree to '3 Taurus' we find, "Steps Up to a Lawn Blooming with Clover"...Keyword: HOPEFULNESS. Positive expression: a creative optimism brought to embrace every facet of everyday living; negative (unconscious/shadow side--jc): an unwarranted self-indulgence and a disregard of all practical reality through a concern over the phantasmal and impossible. And of course, this symbol (word picture) always reminds me of the White House lawn! Do the 'clovers' suggest good fortune for Donald Trump? Well, Sun to Uranus hints at potentials for stubborn pride, loyalty issues, and uniqueness that invites further scrutiny.

As for Barr's release of his version of the Mueller Report tomorrow, it was noted on The 11th Hour with Brian Williams that we Shouldn't Put it Past Trump to Distract from tomorrow's release of the redacted Mueller Report for distraction is one of Trump's go-to political tactics meant to soften criticism of whatever jam he's in at that moment. Yes Big T or a minion of his will think of something!

Horocope data used in this post: Mueller Report Submission March 22, 2019 4:00/4:35/5:00 pm edt Washington DC (4:35 pm puts Trump's natal chart angles on the Submission chart's angles); Barr Redaction Release April 18, 2019 '12:00 am' edt Washington DC. Also note that on March 22, 2019, the Sun and wounded healer Chiron conjoined @1Ari51/55 which suggests someone with a strong will on a mission seeking recognition and positive feedback, someone for whom "pride and power may lie in wait"--R. Nolle, Chiron The New Planet in Your Horoscope, The Key to Your Quest.