June 20, 2019: Here is the August 11, 2019 Horoscope set for Washington DC at the moment (9:37:13 am edt) when Jupiter Stations @14Sag30 (3rd house of Communications) then begins forward movement (as it seems from Earth). Transit Jupiter reaches 15 Sagittarius on or about August 30 and will pass its April 10 Direct Station degree of 24Sag21 (when the planet's retrograde period began) on November 5, 2019 at 9:36:31 pm est after which Jupiterian issues, concerns, projects, and people will make better progress and horizons will broaden. Plus, in the realms of Politics and Finance, a Jupiterian figure's delaying tactics may cease to be effective in November although some improvement in such matters may be noticed around August 11 or afterward. 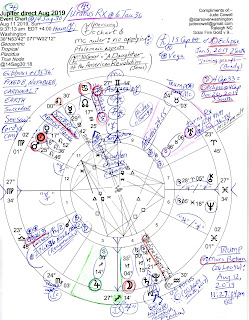 As you see, Jupiter's August 11, 2019 change of direction chart shows 27Vir34 rising and 27Gem14 at Midheaven so that Mercury in Moon-ruled Cancer (just barely into 10th house) rules both the Ascendant and the Goal Point (MC) yet the Messenger planet makes no applying Ptolemaic aspects in this chart which emphasizes its sign and house positions. Naturally, the Sabian Symbols are enlightening for the degrees of each planet, eclipse, station, angle, etc but only the symbol for Mercury's degree (rounded-up to '30 CANCER') is penned upon the chart, upper center..."A Daughter of the American Revolution". Make what you will of this!

Now Jupiter is highlighted in green (if you can see it!) and rebellious Uranus is highlighted in pink because Uranus also changes direction on August 11, 2019 @6Tau36:54, turning retrograde 12 hours and 49 minutes after Jupiter's about-face. As a pair, the combined energies of the Jupiter-Uranus duo indicates potentials for reforms and breakthroughs but also for 'civil unrest (strikes, protests) due to legal or religious systems that stifle justice for the common people' and/or for 'applying legal methods against breakdowns in order' (Munkasey). Often the duo relates to scientific breakthroughs and discoveries (at conjunction--their next on April 21, 2024 @21Tau50) along with a tendency toward a certain form of deafness when the opinions of others are not wanted to be heard!

Now let's note that the 2019 Mars Return of Donald Trump occurs the next day--August 12, 2019 (marked upon the chart, lower right). Also, this chart shows the Sun's return to its and the Moon's degree of the August 11, 2018 eclipse--The Tower Solar Eclipse @18Leo41. Significant in 2019? Probably since Establishment agencies, politicians, and their enablers continue their attempts the break down or destroy the various towers that Trump built! Or at least, they pretend that his destruction is their goal. But are We The People being fooled by a political charade with tyranny the goal? I ask because history tends to rhyme so I must wonder if America's Trumpian lesson echoes the fate of the Roman Empire which eventually gave up its republican form of government and turned toward autocracy and the one-man-rule of Augustus Caesar. Now we watch as "stable genius" Trump and his minions work hard toward converting our nation into this very thing. Any thoughts? No?

Well, here are a few words from a book I'm currently reading and recommending (stop me if you've heard this one):

"No republic is eternal. It lives only as long as its citizens want it. {And} when a republic fails to work as intended, its citizens are capable of choosing the stability of autocratic rule over the chaos of a broken republic...Rome offers a lesson about how citizens and leaders of a republic might avoid forcing their fellow citizens to make such a tortured choice." (Mortal Republic: How Rome Fell Into Tyranny, by Edward Jay Watts).

And as most if not all Americans know, Benjamin Franklin is famous for his answer to a question which echoes from America's founding days...what form of government was created in 1776? "A Republic, if you can keep it."

Sadly I must doubt that the Trump voters of 2016 fully realized the risk they took by replacing our republic, broken as it was, with an autocracy--not of order and stability but one made unstable by more chaos than we had before under the 'guidance' of Uranian Trump who doesn't seem to have ever met an authoritarian dictator he doesn't intend to emulate.