Many moons ago I posted the horoscope of 1981's Reaganomics Eclipse on my WordPress blog, Jude's Threshold (its title a reference to my natal 12th house Saturn, guardian of the threshold). I don't go there often now but you may for there are quite a few post links in the blog's sidebar, posts which may relate to current events.

And since the eclipse may be used to time fundamental changes to America dating from 1981 and the presidency of Ronald Reagan, I'm publishing the eclipse horoscope (of July 30, 1981 @7Leo51 in the 1 North Saros Series which repeated as The Great American Eclipse of August 21, 2017--conjunct Trump's natal Ascendant and royal Regulus) here on SO'W for future reference if needed. And as you know, another Great American Eclipse (8 North series; 'vivid visions or dreams, flashes of genius, new-found inspiration'--Brady) will perfect on April 8, 2024 @19Aries and will 'split' our nation vertically (East-West) while the 2017 eclipse split American horizontally (North-South).

So if you will, please enlarge the image to read chart notes concerning the change-of-direction 'wild card' eclipse of 1981 which conjoined the natal North Node of our nation: 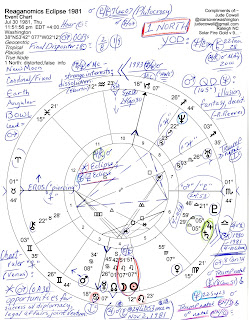 Yes, the Decade of Greed of the 1980s really "hit the jackpot" during the presidential terms of Ronald Reagan whose administration early on made deeper cuts to the Federal School Lunch and Child Nutrition Programs (25%) than the original Omnibus Reconciliation Act of 1980 signed by President Carter had done (8%), and thereby allowed schools to count condiments such as ketchup and pickle relish as vegetables. This created controversy of course and was a sign of disrespect toward American children by politicians of the GOP persuasion in particular. Later, the Congress of 2011 followed the GOP vs Children blueprint by allowing meagerly topped pizza to be counted as a vegetable. What do Republicans have against children, I wonder? Pardon me for typing this but can skin color have anything to do with the GOP's neglect of the youngest among us? Or is it simply a matter of selfishness and soul-destroying greed? And of course with Trump, this child neglect (and I would add, abuse) shown by the GOP of the 1980s has 'blossomed' into putting children in cages, separating them from their families, then losing a great number of them--or, have they marked 'em up and sold them on?

Well it seems to me that one perfect yet simple example in stark relief of the redirecting of America from a (reasonably) caring society into a Circus of Greed and Abuse as run by the still-greedy GOP has to be the Carter Inauguration of 1977 when Mr. Carter became the first US president to walk from the Capitol Building to the White House in the post-ceremony parade. In contrast, both Reagan and Trump motored regally from Capitol Building to White House in high style, ensconced in fancy limousines, their ritzy selves hidden from potential rotten-tomato-throwers.

And one of the many tragedies to spring from the Trump era is that his supporters (fans and cult members, alike) vote for a heartless, lewd man who only pretends to care about them and their circumstances when really he'd just as soon forget they exist if he didn't need them to spin his illusion of power and as props for bolstering his ego during his never-ending campaign rallies.

Now here's a related post from 2016 concerning the Reaganomics Eclipse of 1981 and includes a Thom Hartmann segment on the neo-liberalism that rots away at the heart of American society, Neo-Liberalism an Economic and Political Cancer!.

Do you know that the natal Jupiter of Ronald Reagan, though he's passed into the Great Beyond, returned to natal degree (13Sco44) three times recently: December 14, 2017 (the year of the Trump 'election'), June 24, 2018, and July 26, 2018. A Scorpio Jupiter tends toward materialism, a ruthless striving for possessions and pleasures, and a habit of overrating oneself. And in Reagan's 1981 Inauguration horoscope, transit Chiron @13Taurus conjoined the chart's Ascendant (Oath of Office) suggesting a wounding or a blind spot, with Reagan's natal Jupiter opposite and conjunct the chart Descendant. Turning to master astrologer Richard Nolle we find that a Jupiter-Chiron opposition implies, "one whose Quest aims at a radical redirection of the socio-cultural environment - anarchy and occultism play a central role in one's transformative vision." So apparently transit Chiron opposing his natal Jupiter (across the financial 2/8 axis) was inspiring to The Gipper who was nearly assassinated on March 30, 1981. His condition much more serious than the public was told, Mr. Reagan recuperated quickly for 70-year-old and returned to the White House on April 11, 1981 to continue overseeing our 'Decade of Greed'.