Cold War-Yalta Astro-Notes: 1945 and Beyond

It's probably not good news that one of the planets in a historical horoscope soon to be 'hit' by the harsh January 12, 2020 Saturn-Pluto Conjunction @22Cap46 is Mars in the February 4, 1945 Cold War Horoscope of the postwar Yalta Conference between FDR, Churchill, and Stalin which suggests potentials for 'brutality, violence, ruthlessness, and the necessity to fight for one's existence' (Ebertin). Additionally, the January 12, 2020 conjunction of compressed energies manifests upon the Cold War's 19 South Prenatal Eclipse ('PE' of January 14, 1945 @23Cap41 = 'lucky breaks'--Brady) and it conjuncts Trump's natal Vertex ('VX' @22Cap51), all of which are penned on the right side of the chart; Roosevelt's birth data is listed, upper right; and a Vertex is a point of 'fated encounters' and/or 'changing work conditions': 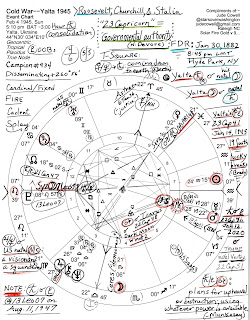 Also listed on the chart underneath FDR's natal data is a depressing cosmic occurrence--Yalta's Saturn Rx @4Can36 conjoins FDR's natal Moon, and Yalta's Moon conjoins FDR's natal Saturn--a double whammy, we could say. So obviously, the conference was held during an emotional low point in Roosevelt's life, plus, Moon-Saturn contacts often have health connotations. We can see this in Yalta photos and the dark circles around his eyes.

Then sadly, as you know, President Franklin Delano Roosevelt died of a brain hemorrhage about 2 months after the Yalta Conference ended, his "willful ignorance" about Stalin and communism no longer influencing him. Yet due to recent events and Trump's turns against traditional US alliances, one may wonder if in 2019 and beyond the tendency toward such 'ignorance' continues to influence certain denizens of Washington DC who thereby work against the better interests of our nation.

Recommended: Roosevelt's Failure at Yalta from the Hoover Institute circa 2004 which touches uncomfortably upon the current day relationship between the US and Russia via Donald Trump's transactional, subservient union with Vladimir Putin. Alternatively, here's a different view, Why Roosevelt was right about Stalin - that we could do business with him because at heart Stalin was a businessman. So was FDR naive about the Russian leader of his day? Does Donald Trump behave like a Kremlin asset? The horoscope, above, has some indication of threatened violence and of course many folk (such as yours truly) suspect that Putin controls Trump bwo blackmail and/or threatened violence--and perhaps Stalin controlled Roosevelt in a similar fashion. If so, are current events and those of the Roosevelt administration and the Stalin regime more alike than we know?

Well, for more info on 1945 events, try a Politico article by Andrew Glass Roosevelt departs from Yalta, February 11, 1945 which details some of the aftermath of the Yalta Conference such as FDR's assurance to Congress that, "I come from the Crimea with a firm belief that we have made a start on the road to a world of peace." But it soon became clear that Stalin would not honor his promise of free elections for Poland. Naive? Willful ignorance? Complicity under duress?

So I surmise that the upcoming planetary pile-up upon the 23 Capricorn degree indicates a cosmic time link involving events of 1945 and today, with the same nations participating. And on the horoscope you see (mid-center, top) a notation replete with on-topic cosmic synchronicity: 23 Capricorn = Governmental authority, according to fabled astrologer Nicholas Devore.

So as 'they' always like to say, timing is everything which suggests to me that whatever upcoming shift "this is," it has been in the planning stages for a very long time meant to coincide with the beginning of a new order timed by Saturn conjunct Pluto, then at Winter Solstice 2020, Jupiter conjunct Saturn upon US Inaugural Sun (the Office of the President), and with three conjunctions of the wealthy plutocrat duo Jupiter and Pluto sandwiched in between.

On March 5, 1946 former Brit PM Winston Churchill gave his "Iron Curtain" speech at Westminster College, Fulton, Missouri. His speech is considered a key event in the early days of the Cold War. Controversial in the US, the speech was countered by Josef Stalin who wrote a direct response to it.