According to The Independent, Murdoch-Trump ties go back to the 1980s when Murdoch's New York Post made playboy Trump a gossip column regular. But these days Mr. Murdoch has a dim view of the man he describes as an a**hole he can't get off the phone, plus, other choice descriptions which appear in Michael Wollf's book Siege: Trump Under Fire, published in June 2019 as a sequel to his Fire and Fury.

Anyway, this post is not about their relationship as much as to display the natal horoscope of media mogul Rupert Murdoch (below) and note that his Prenatal Solar Eclipse ('PE') in the difficult 4 South Saros Series will again manifest on December 14, 2020--this time @23Sag08, conjunct Murdoch's 12th house Moon (12th house of Hospitals? Moon = physical body; well, he is of an advanced age, born in 1931).

And yet there's more to Rupert's eclipse story and it involves--you guessed it--Donald Trump. For 4 South eclipse details check out a previous post concerning the December 14, 2020 Eclipse which 'hits' Trump's natal chart, too. Apparently karmic cosmic links exist between the two men which I'd never noticed before until I nosed into Murdoch's Prenatal Solar Eclipse.

So below is a view of Murdoch's March 11, 1931 Natal Horoscope with details penned upon the chart in my usual messy fashion for those who wish to read them. Highlighted in green (lower left) you'll see that his recent Saturn Return (@21Cap04, 1st house) occurred on December 29, 2019 and was soon conjoined by the January 12, 2020 Saturn-Pluto Conjunction (22Cap46--conjunct Trump's natal Vertex 22:51, yet another karmic indicator). Power and control issues abound for Murdoch these days along with regrets over the past and a potential for limitations on his ambitions. (See below for a note on his natal Saturn-Pluto opposition).

Additionally, Mr. Murdoch has already passed his Uranus Return/s which perfected in 2014 into 2015 (highlighted in blue, lower right), a watershed time when the past no longer holds as much power over him and he began to feel an urge for freedom--and appropriately, in June 2015 came the announcement that he was stepping down as company CEO, handing the reins to his son, but would still "have a voice" in company operations: 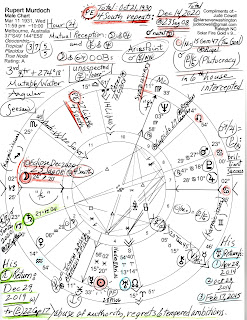 Born in 1931 when Saturn and Pluto opposed one another, Rupert Murdoch's life has been one of dissatisfaction and a deep urge to "annihilate existing forms" (A. Oken) and to destroy the existing order. With the harsh, cruel opposition coming at the height of the Great Depression and the rise of fascism in Europe and Asia, his life and goals are inspired by a potential for economic structures to be uprooted so that new forms can take their place, a goal of destruction that transit Pluto in Capricorn willingly under girds as I type, and we careen toward America's first-ever Pluto Return/s. My point here is that the continuation of this 'new order' process is what we are now reaping, driven by such men as Rupert Murdoch and with mouthpiece Donald Trump propagandizing and gas lighting at us from behind the bully pulpit--the very place where he does not belong.

So if you wish, view the Fascism Rising Solar Eclipse of 1933 in the 7 North Saros Series which repeats in 2023 - because forewarned is forearmed!