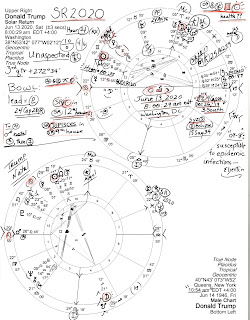 The SR Mars-Neptune conjunction in SR 9th house of Foreign Lands and Legal Affairs conjoins the SR Saturn-Uranus midpoint (see midpoint picture, below) - all in shady, secretive, infection-prone Pisces, with Pisces on the 9th cusp. Sneaky things may be hidden here! And note that the Sabian Symbol for Mars-Neptune: "21Pisces" = "A Little White Lamb, a Child, and a Chinese Servant." Of course, a "servant" could describe Trump controlled or compromised by China (via money laundering), or it could have something to do with the beginning of the Wuhan virus with its most at-risk targets (or victims, such as seniors and children) represented by an innocent "child."

Then as you know, the 12th house is the Neptunian realm of the Unconscious, Politics, Large Institutions (ex: Congress), Self-Undoing, Karma, Secret Enemies, and, in relation to our topic, Hospitals and/or Illness (opposite the 6th house of Health and Service).

Therefore, since the world is under threat of the corona virus as I type, and because Trump's SR 2020 horoscope shows links to health concerns and weakness issues, this post will primarily relate to medical potentials particularly when it comes to Donald Trump (whose health could not possibly be as strong as 'they say'!) Of course, what's shown in his SR chart could be only due to the contagion itself and the circumstance that America is stuck with--a fact-and-science denier who's 'dealing' with the contagion along with the 'help' of VP Pence (put in charge to soak up any blame that accrues, I suspect; we'll see). On the brighter side, perhaps the viral threat will be over or mostly over by mid-June! After all, Trump's natal Jupiter-Uranus trine does make him quite the fortunate fellow and we could all use a lucky break on this one.

So let's get the troubling midpoint picture out of the way (political, social, biological), then we'll discuss Trump's 2020 SR Sun and SR Moon, the primary considerations in a Solar Return chart that's 'good for' an entire year. The following will contain a jumble of my usual sources: Ebertin, Tyl, and Munkasey; any, all, or none of the potentials may result or may be triggered by transits or progressions later on.

As a midpoint, 'Saturn-Uranus' suggests potentials for 'counter-revolutionary rule, violent people, quarrels, avant-garde vs the conventional, the need to fight for gains, exciting the status quo, and/or heart block'.

Add Mars in contagious Pisces to Saturn-Uranus and several possibilities are suggested such as 'the wrong use of energy, violent acts, forced release from tension or strain, great efforts and toil, challenging others for a decisive contest or fight, deprivation of freedom, injury, tremendous upheaval possible in rebellion, calamity, or over-exertion, anxiety about how things will proceed'.

To Saturn-Uranus add Neptune, strong in its own sign of Pisces, and we have potentials for 'falsehood or malice caused through weakness, resigned to the inevitable, abandonment of resistance, weakening strength, separation, bereavement, masked changes designed to break traditional roles, the delusion that change will improve traditional methods, breakdown under emotional pressure', and/or 'a new vision fighting to be understood'.

As for Trump's SR 2020 Sun and Moon, here's a list of chart factors (not including the SR 10th house Uranus 9Tau09 which is unaspected and thus unencumbered by outside influences and acting independently in spurt-like bursts of activity--this echoes his chaos-loving natal Uranus, his guiding planet):

We should also note that powerful Pluto 24Cap28 leads the tilt of a BOWL shape denoting a leader with a mission or an advocate for a cause. Unfortunately, the mission and cause seem to be implementing an anti-constitutional dictatorship in America (Pluto in Capricorn = "the dictator"--Ebertin). Then in the 6th house of Health lurks the December 26, 2019 Solar Eclipse 4Cap06 in the 3 South Saros Series of 'traumatic transformation', this SR 2020's PE. But soon the Summer Solstice 2020 Solar Eclipse will manifest with 4 North themes of 'restraint, restriction, separation' (as in quarantine?), 'illusions', and 'events that block' (Brady).

Cosmic Conditions of Trump's 2020 Solar Return Sun and Moon include but are not limited to:

SR 2020 Sun in the Cadent 12th house (transitions, fluctuations, preparations, steps taken behind the scenes), along with the North Node of future direction (at a critical 29th degree) suggests solar events taking place near the end of the period--just before his 75th birthday June 2021. But in 2020, even the 9th house SR 2020 Moon complies for the 9th is also a Cadent house of preparation--and Trump's SR 2020 Sun and Moon square one another which suggests challenges, conflicts, frustration, and blockages between goals and needs; a Sun-Moon square in a Solar Return chart may suggest dynamic energy but is unfavorable in general, and may count as as a 'health aspect.'

Transit Mars square Trump's Sun often denotes aggression, conflicts with males, and/or head injuries or blocked vitality. And transit Neptune square his Sun indicates that his leadership position is difficult to maintain, confusion and deception reign, and formerly reliable resources may become elusive or eroded. Transit Neptune square his natal Moon (21Sag12) suggests even more confusion and disorganization along with undermining conditions (which can include health concerns). As you know, that's one trouble with a natal opposition-what squares one end squares the other, plus, his Gem-Sag Full Moon is on his (karmic) Nodal Axis. Additionally, Uranus in Taurus, sign of the throat and shoulders, forms a semi-square (45 degr) to both SR Sun and SR Moon--another health indicator which may be merely an irritant or a mild or minor issue. Hope his bone spurs won't act up! See the midpoint picture this forms listed, below.

A closer look at his SR Moon in mutable Pisces suggests potentials for drug involvement (also with Mars-Neptune), and/or physical fragility (yep and yep, I'd say). and with Luna in Pisces, there could be travel (of course), family concerns or loss, new conditions in the domestic sphere, or even a change of jobs (fingers crossed!)

Yet the SR 2020 chart does show beneficial opportunities and a 'ray of hope' for Trump such as the two sextiles (60 degr) from Jupiter and Pluto toward his SR Moon. Apparently, his influence upon the public remains in force although his tendency toward self-righteousness, being stuck in the past, and experiencing a measure of loss through habitual thinking will also continue.

Now before I forget, we should also note that wealthy/stealthy Pluto is the SR planet closest to a chart Angle and thus takes precedence in the chart as 'he' leads the BOWL toward the SR 6th house of Health, Daily Rounds, and Service (Civil, Police, and Military).

Obviously, the Trump coup continues, perhaps with some of its 'reforms for improvement' hidden beneath the corona virus scare and the future restrictions he and his authoritarian comrades have in store. For as we see, the planetary trio of heavyweights appearing in the SR 7th house of Partnerships suggests potentials for 'religious and social fanaticism' and/or 'difficulties caused through illness'.

Neptune-North-Node = Uranus: 'disruption and agitation via the actions of others; sudden displacement then isolation' (this picture turns up in the DNC 2020 horoscope).

Well, there it is, my glancing assessment of Trump's Solar Return 2020 Horoscope. And if I added one more cosmic factor of curiosity it would be that the SR Ascendant 22Cancer12 brings up Inauguration 2017's Syzygy Moon (last lunation prior to January 20, 2017) which is, was, and always will be, the Full Moon of January 12, 2017 conjunct the natal Saturn of the 'unaccountable' yet Saturnine Mr. Trump.

As always, your encouraging shares and tweets are always much appreciated! Got on-topic comments? Then leave them with this post! jc