Got a minute? Below is a brief synopsis on video concerning the founding of the U.S. Postal Service by the Second Continental Congress on July 26, 1775 with Benjamin Franklin appointed its first postmaster. In that era, Congress considered the founding of a postal service to be "crucial to the future of the 13 Colonies," a sentiment that modern-day (Republican) congress members do not hold because it doesn't jive with their campaign to sabotage and collapse the US government, and to privatize everything they can grab. Perhaps a few Democrats agree with this, I don't know. But ending the US Post Office is yet another example of how the greedy GOP is an anti-societal bunch of operators with bad intentions toward the American people and with no thought for the common good:

As for the Astrology of July 26, 1775, our USPS was founded under Sun Leo-Moon Cancer energies, a vulnerable and self-absorbed combination. Communicating Mercury @12Leo was retrograde that day which suggests a subsequent re-do or review of the legislation which formed the service. This relates to the fact that President George Washington signed further legislation, the Postal Service Act, which made the agency a permanent part of the federal government on February 20, 1792 with Mercury direct in Aquarius. Permanent. George Washington did that.

So as you know, Gemini is ruled by Mercury, the planet often represented as a wing'ed messenger as shown, below. Additionally on July 26, 1775, expansive, inflating Jupiter was also posited in chatty Gemini, signifying the tremendous volume of mail delivered through the service's 237 years of operation. Oddly enough, Republicans behave as if they've never benefited from the US Postal Service! (Imho, anyone who depends solely on an Internet powered by an ancient electrical grid for all their communications must be completely daft. And excessively gullible.)

And so 2020 has dawned and the agency is on the verge of running out of funds in June! But this is thanks largely to 'help' from the Republican Party's imposed pension funding scam (a set-up for failure), and Trump's rejecting a bail-out package for the service - because mail-in votes could elect Democrats (!) in November so Trump would rather kill, or at least seriously hobble, the USPS than to lose the election. Astounding how much election rigging it's taking Republicans just to keep a substandard, unfit-for-office reality TV host playing at being 'POTUS'! Besides, the US Post Office delivers people's meds and other health supplies, too! See Postal Service on the verge of collapse and 63,000 jobs are at risk. Our nation is on the verge along with it, for meanwhile, transit Pluto creeps through governmental Capricorn and lends a hidden hand with the destruction of Saturnian structures as he heads for America's first-ever Pluto Return/s - three exact returns all through 2022.

Therefore, for the future of our Republic and the common good of We The People as we attempt to 'save what's left', my fervent hope is that a majority of Americans will speak up and out against the Republicans' plan to remove the US Post Office from our lives, a plan which just might culminate in 2027. Why then?

Because the Prenatal Solar Eclipse ('PE') of the US Postal Service in the 11 South Saros Series - a Total eclipse which perfected on March 1, 1775 @11Pis11 and is also the PE of the American Revolution - has major themes attached: 'old methods/ideas fail; new systems are needed to deal with events; any blocks could be violently or tragically removed' (Brady's Predictive Astrology). And so another Total 11 South eclipse occurs on August 2, 2027 @10Leo - the natal Pluto position of USPS saboteur Donald Trump.

Unless you think that maybe he will be the block that's removed! 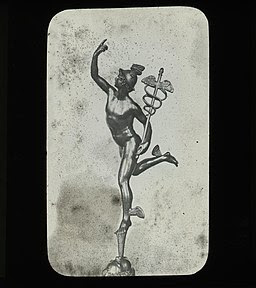 Above Image: Mercury the Swift Messenger of the Gods.

Interesting that you also published an astro look at the USPS situation. I was a bit hurried, and did not look at eclipses.