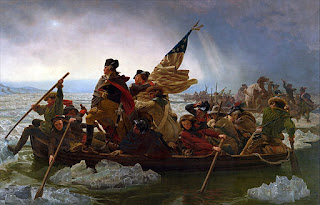 As a mere "armchair genealogist" nothing I discover online through the research of others is for 100% certain yet some information I find does seem to be genuine. One such is my ancestor Francis Power of Maryland (born February 21, 1756) who is known to have signed up to serve in the Revolutionary War with the Marblehead Mariners under Colonel John Glover. And as you probably know, the Marblehead Mariners were the regiment that ferried the Continental Army, its artillery, horses, and General George Washington across the Delaware River that stormy night of rain, sleet, snow, and ice, a legendary event which is famously depicted in the painting, above.

On a genealogical note, my ancestor Francis Power would have been 20 years old on that difficult night and headed for age 21 on February 21, 1777. So where is young Francis Power in the Crossing Horoscope shown below? Three links pop out: his natal North Node @11Virgo conjuncts the Crossing's IC (12Vir20), the Basis or Foundation of the Matter, his natal Mars in early Cancer rises at sunset (Mars the warrior), and his natal Uranus in mid-Pisces conjuncts the Midheaven/'MC' (12Pis20). Naturally, both Cancer and Pisces are Water signs. And as you know, the Mars-Uranus duo suggests potentials for: 'a sudden application of force, unusual achievements through an extraordinary power of effort, passing a test of nerves, a struggle for survival, violent people, revolutionaries, fighters for freedom, and/or 'danger or peril which has fortunately passed' (Ebertin). Whew!

Well, I suspect that astrologically, Mars-Uranus describes Washington Crossing the Delaware - and the American Revolution - as well as anything else could do. But for 'Francis the Mariner' I'll add the 4th house Mars-Neptune combo as well for its 'people associated with water or navigation' description, plus, the fog of war. Plus, the fact that the two planets are in different signs (Neptune in Virgo, Mars in Libra--conjunct Hopi, asteroid of ambush and intolerance) is revealing and probably relates to the fact that some of the Marblehead Mariners were African-American, some Native American, and thus they were disapproved of or criticized (Virgo) by certain parties. My feeling is that they successfully did the job at hand so kudos all around!

Yet ferrying General Washington was not Mr. Power's only military service for he also fought at the Battle of Bunker Hill (aka, Breed's Hill because it actually was) according to my genealogy research, and apparently fought in the naval War of 1812. One clue concerning the reliability of his military service record is that he received land after the War in Georgia, my home state. And there is where his line descends through a few generations to yours truly, born in Athens, Georgia.

So! Below you see a messily marked up Horoscope of George Washington Crossing the Delaware. Word is, they began the crossing at "about sunset" so the horoscope is set symbolically for sunset 4:35:06 pm LMT with the previous night's Full Moon (@3Can55 8:06 pm LMT) rising. However, the light of the waning Full Moon may not have been much help for their activities considering the tremendous blizzard (veiling their efforts from the enemy!) that they had to slog through in order to avoid the river's chunks of ice, to land and unload heavy equipment, ambush their opponents, the Hessian soldiers encamped at Trenton, and, exhausted, to fight and win the Battle of Trenton, a victory that invigorated the Patriot cause, Hallelujah!: 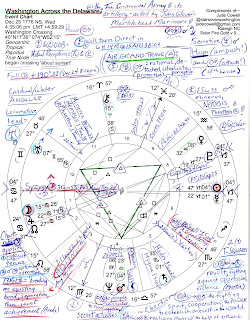 Please enlarge the image to read my study notes if you wish. You'll see a protective Air Grand Trine (Venus-Mars-Uranus) which suggests a closed circuit of people with intellect, idealism, and planning ability while T-Squares add dynamic energies to the event (see them listed, lower right).

Eclipse-wise, the Crossing falls into the 13 North Saros Series (see its theme, lower left) which is the Prenatal Solar Eclipse Series ('PE') of the American Revolution of which this crucial Crossing event is a part. Occurring August 14, 1776 @21Leo52, I consider 13 North to be the true PE of America because the final signing of the Declaration of Independence on August 2 fell within 13 North's influence (signing was within two weeks of the eclipse). Its theme tells the American tale!

And yet, dear reader, you're welcomed to disagree but there it is!

Astro-Note: almost 23 years after the night depicted above, George Washington succumbed to a painful throat infection which was probably made more deadly by a recurrence of an earlier disease - all together a Mars-Neptune affair. We should note, however, that as far as the Astrology of battles go, Jupiter the General @22Cancer is retrograde (Rx) which is not a favorable condition for the attacking forces. My thought is that perhaps General Washington's natal Jupiter being retrograde had some say in the matter because he was accustomed to Jupiter Rx energies of carefully taking his own moral code into consideration while, in this case, performing as a hero with a social conscience, a strong sense of justice, and a deep desire to avoid negative reprisals. So as it turned out, with the excellent teamwork and cooperation of Washington's troops and officers, it was the Hessian General Rall for whom the Crossing and the Battle of Trenton resulted in an unfavorable outcome.