First US Presidential Election vs Election 2020

May 28, 2020: So if you've read details concerning the First US Presidential Election held from December 15, 1788 to January 10, 1789 you know that the 69 electors voted unanimously for popular candidate George Washington. And if you keep up with current US political elections and the rigging, cheating, and gerrymandering activities perpetrated by one political party in particular, you would be pardoned for suspecting that Election 2020 may be America's last.

Stolen and stacked courts are a primary feature not a bug of the GOP master plan to permanently redden America despite the Will of the People, a democratic concept Republicans have never particularly favored, not within my memory anyway. Along with Trump's fake Twitter fuss about being fact-checked, such voting travesties, perversions of law, and dirty political tricks are discussed in Brad Friedman's May 27, 2020 BradCast in his interview with David Daley author of Ratf**ked: the True Story Behind the Secret Plan to Steal America's Democracy (and Why Your Vote Doesn't Count) and Unrigged: How Americans Battled Back to Save America. This truly is a don't-miss podcast.

Of course, between the outrageous antics and distractions by con man Trump and the debilitating Covid pandemic now virtually paralyzing the country, Republicans are counting on the American electorate to neglect such basic considerations as a permanent shift from democratic Republic to authoritarian state stretching into the foreseeable future and engineered by bad actors both foreign and domestic. Yes, things are worse than most people think but there's still a chance to right our Ship of State if enough of us pay attention and act to save America!

Horoscope: Prenatal Solar Eclipse @7Sag15 of the First US Presidential Election: Moral and Ethical Concepts and Philosophy of Sagittarius Lead to Karmic Progress

Now as you see, my study notes are penned, below, upon the Horoscope of the Prenatal Solar Eclipse ('PE') of America's first-ever presidential election which also happens to be the PE of George Washington's Inauguration of April 30, 1789 (horoscope shown on my WordPress blog, Jude's Threshold) and fortunately Jupiter was moving direct by then. This passionate 7 North Solar Eclipse remains of influence - is cosmically imprinted upon - all our quadrennial presidential elections including that of November 3, 2020 no matter who has been or will be in power at 1600 Pennsylvania Avenue as long as our now-sabotaged America exists and obviously America is in desperate need of a return to moral and ethical concepts and philosophies: 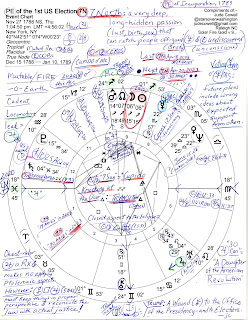 As always any and all Shares and/or your on-topic comments are much appreciated but please note that no ads masquerading as 'comments' will be published. jc

A further note: Of interest in the Horoscope of the US Constitution (September 17, 1787) is the Moon @7Sag10 conjoined by the 1788 7 North Solar Eclipse (basically a Lunar Return for the Constitution) and rebellious Uranus @29Can11 conjoined by 1788 Jupiter! Jupiter-Uranus = a fortunate turn of events - just what we need going forward!

For more reading on the 'Presidency' of Donald Trump you may wish to see The Whimsical Sun (POTUS) of Inauguration 2017.

In case you missed it here's the tragically appropriate Mourning in America ad. jc