June 25, 2020: Below is a bi-wheel of the Department of Justice (DOJ) Dedication Horoscope of 1934 (inner; Masonic ceremony led by FDR; '3:00 pm' - D. Ovason) with Bill Barr's Senate confirmation horoscope of February 14, 2018 (at approximately 1:05 pm est Washington DC - my thanks to mundane astrologer Gary Lorentzen for the timing). The partisan Senate confirmation vote was 54 to 45 for "the cover-up general" so that scofflaw Trump would be shielded from answering for his crimes and could more easily continue his nasty habit of overstepping the traditional limits of Executive power. Basically, Barr was installed in order to save Trump's shall we say bacon.

How many threats of retaliation were delivered against any senators considering a vote against Barr I cannot tell you but in multiple spots in the horoscopes you'll find mention of career-ending associations with certain dark elements of society, including the criminal syndicate/procurement variety. See particularly the dark green highlighted notes in 10th house and on the right (via rounded-up Sabian Symbols for the 2019 ASC-DESC axis degrees; also see the MC's symbol, the WHY? Point, top right, "18Sag").

And note that Opus Dei agent Barr's confirmation occurred a mere 4 days prior to the DOJ Uranus Return, number three of three (dates penned on chart, in blue), during what continues in 2020 and beyond to be 'a titanic power struggle' between global forces -> Pluto in Capricorn opposing Pluto in Cancer with the 2019 North Node ('NN") pointing toward 1934 Pluto, and the 2019 SN (aka, 'tail of the dragon') swiping 2019 Pluto. So considering our titanic topic is it curious that the pairing of Pluto-NN is sometimes known as the "tiger by the tail" aspect? 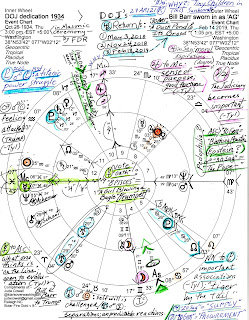 Please enlarge the image if you wish to read my study notes - not much text today for this week I'm mired within a household repair nightmare ever since the June 5, 2020 Lunar Eclipse 'hit' an angle in my natal horoscope!

Now here's an article about the alleged genesis of Barr's 'job application' memo but to cynical me (as a former resident of Washington DC!) this all seems a big old set up especially since Republicans knew very well what Bill Barr was and is capable of perpetrating to keep a president in office: William Barr's Unsolicited Memo to Trump about Obstruction of Justice in which Barr criticized the Mueller investigation of Russian interference in the Trump campaign and "questioned the scope" of the investigation. But perhaps we can agree that the "obstruction of justice" has been on the Barr-Trump-Republican side.