June 28, 2020: Well, apparently as the Cosmos would have it, Election Day 2020 (November 3) is preceded by Donald Trump's Nodal Return, a time when new or beneficial alliances tend to form, one's destiny is on the front burner and is perhaps up for reconsideration. If the current course is 'on track' things proceed with a Jupiterian boost although considering that the destiny of America is linked to such a sub-standard actor playing the role of POTUS, it pains my American heart to type this for it possibly adds to the portents of a second Trump term in office. Yes, Joe Biden's natal planets receive planetary contacts on November 3rd but scofflaw Trump's natal planets have more - and with the voting Moon (the public) in changeable Gemini, at first (12:00 am edt) conjunct Biden's natal 7th house Saturn, then floating on through Trump's Gemini trio (17-23 Gemini). None of this is completely positive for either candidate, of course, and Luna does tend to fluctuate or vacillate (plus voting planet Mercury stations on November 3rd, changes his mind/direction and/or represents election machine glitches) but a variety of factors are certain to bring the usual mixture of flowing vs blocking events and conditions that the Universe so often delivers to test a fellow's resolve and mettle.

So when Trump asserts that the 2020 Election is "rigged", we can know that certain tactics are already in play. It looks as if only a landside for Biden can override shady political tactics of the GOP to become our country's saving grace - to the extent that Republicans can be forced to get out of a Democratic president's way (plus, winning the Senate would definitely help!). Of course with Joe Biden, the GOP doesn't have the 'race card' to focus on this time around but they have a full deck of potential scandals they can stir up from next to nothing and have, in fact, already begun trying to do so (Ukraine, etc). And we know that a large indicator on November 3rd is transit Neptune Rx @18Pisces, eroding planet of deception and scandals, tapping at Biden's natal IC door and after a pause will proceed to silently slide on in to his 4th house of Roots and Domestic Scene (which also affects Biden's 10th house of Career), thereby undermining him if possible. Unless the scandals stirred up amount to nothing and thus fail to stick well enough to prevent a Blue Tsunami on November 3rd! But uh-oh - Neptune in Pisces also represents the pandemic and infections so there's the suggestion of a myriad of possibilities or even a Biden scandal connected to the ongoing catastrophe we're all facing. Well, I don't know about you but I'd say both Biden and Trump are in the 'high risk' category if for no other reason than their advanced ages.

So as you know, a 'new order' is arriving as we can feel and can know from all the major planetary conjunctions in 2020 including the Big One, Jupiter and Saturn which caps off the year at Winter Solstice on December 21, 2020 by conjoining @00AQ29, the degree of US POTUS Sun.

Actually, we've discussed this synchronicity before so I won't bore you with it now but will add that this synchronicity may have been realized and set up for future realization by FDR and his cronies when they changed the US Inauguration date from early March, usually the 4th (in 1934), to January 20th (or the 21st if the 20th falls on a Sunday) in 1937. This seems very likely an astro-fact to me if not to you, and as always, you're welcomed to disagree.

Yet in spite of all this, I am determined to publish the Horoscope of Donald Trump's Nodal Return 2020 which perfects on October 29th, mere days prior to Election Day 2020 with a few of my study notes added to the chart (below), plus, a few words on the symbolism of Trump's Nodal Axis - his Jupiterian North Node in natal 10th house of Career and Public Status and Saturnian South Node in his 4th house of Roots and Family (conjunct his Moon = estrangement from mama!). A few of Trump's natals are sprinkled around the outside of the chart and for those who use a founding horoscope for America with a 00/1Libra Midheaven ('MC'), there is vengeful Venus @1Lib44 leading a ruthless Locomotive shape of his Nodal Return planets as she crosses into our national 10th house where she'll become the prognosticator of victory or defeat in Election 2020 (in Libra, the incumbent wins unless a landslide for his opponent interferes) after which Venus will meet with US natal Saturn (14Lib48), suggesting a time when structure, order, and tradition could return to our nation: 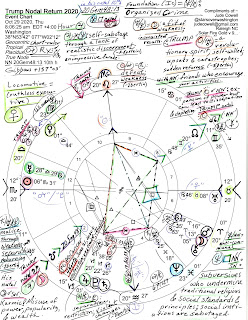 As noted above, most of Trump natals are penned on and highlighted in pink including his natal Sun-Uranus = North Node so a Nodal Return (approximately every 19+ years) always reiterates his 10th house trio with potentials of 'a revolutionary spirit, self-will, upsets, catastrophes, sudden reforms'. With his North Node added we have 'friends and associates who encourage (his) activities' (Ebertin). When it comes to Drumpf that's probably friends in high and low places, both foreign and domestic. Not penned on for lack of space are his Venus and Saturn in watery Cancer (would be in Return 9th house of Legal Affairs and Ideology) and his Mercury @8Can51 (imagine the Tweetie One in Return 8th house).

Now as you see, this particular Nodal Return when set (symbolically) for Washington DC falls within the 8th house of Corporatism, Shared Resources, Debt, Credit, the occult, transformation, and death. Opposite in the 2nd hou$e of Values, Earning Ability, and Possessions we find Trump's natal Moon-SN conjunction now swiped again by the tail of the dragon, the transiting South Node, a karmic Saturnian combination of misuse of power and more (see notes, lower left corner), plus, potentials for bad timing and/or lack of popularity. Also in 2nd house is the previous/current Summer Solstice 2020 Solar Eclipse which perfected upon the Cardinal World Point of 00Cancer (global events) with its disruptive 4 North themes of 'restriction, restraint, separation, and illusion' (Brady). Obviously this describes in part the Covid-19 pandemic and its negative effects on families, domestic scene, business concerns, the caring professions, communications, finances, the American people in general and the US government with our 1776 Venus-Sun-Jupiter and Mercury Rx in Cancer. Naturally, the planetary gorilla skulking in the background of it all is America's approaching (already within a five-degree orb) Pluto Return/s of 2022.

And we should always note that whatever affects scofflaw Trump also affects America because tragically, as of January 20, 2017, his karma is our karma. So let's close this fuss with the rounded-up Sabian Symbols for Trump's natal Nodal Axis with the symbol for each end of the axis revealing the Illumination Point of its opposite - North Node of future direction vs South Node, a point of limitation when past behavior and/or talents are depended upon but no longer work in the present - hence neurotic behavior:

South Node @'21Sag': "A Child and a Dog With Borrowed Eyeglasses" = "EXAMINATION...positive expression: an exceptional skill in the analysis of personal opportunity throughout the many dimensions of experience; negative expression: distorted vision and self-defeating prejudice".

A Previous Trump-Related Post: July and December 2020: Pluto opposes Trump's natal Saturn a period when the authority and status (Saturn) of his nibs are challenged by powerful forces (Pluto) and his lifestyle may be altered or permanently transformed.