July 2, 2020: As you've heard, this morning at 8:30 am edt in Bradford, New Hampshire, Ghislaine Maxwell, culpable associate of the late Jeffrey Epstein, was arrested by the FBI. A myriad of questions about whether she'll "spill the beans" and "name names" of the rich and powerful who were customers of their sex trafficking enterprise are top of the list along with wonderings about those already known to have been involved in some way such as Donald Trump partying with Epstein during Trump's NY playboy days (you've seen video clips) prior to what Trump has described as their "falling out". This type of trafficking is a branch of the global crime syndicate that now operates out of Washington DC with you-know-who acting as figurehead.

So below is a bi-wheel of Trump's natal horoscope (center) - not with Ghislaine Maxwell's natal chart surrounding it (although some of her natal placements are penned around the outside: see her natal Gemini ASC in 10th house = peep-eye!). But with the horoscope of her arrest today, reported as "8:30 am edt", as noted, above: 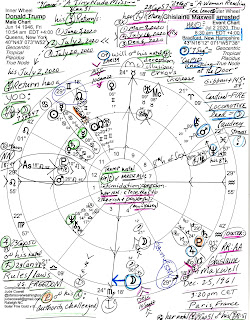 So was Trump more involved with the Epstein-Maxwell enterprise than he now admits? Well, looking at his chart with the 'arrest' transits, you see his 12th house (hidden, secretive) Mars and Pluto in sexy Leo with their midpoint conjunct not only today's 'arrest' Ascendant (18Leo53) but both also conjunct Maxwell's natal North Node (18Leo44) of public and other contacts. My notes on these midpoint pictures are penned in the center of the chart where her indication of 'close ties to the rich and powerful' describes Trump via his sexy Mars-Pluto midpoint. Not a conclusive factor, of course, and it needs support from elsewhere in the charts, but there it is.

Another curious synchronicity is that Trump's second of three Mercury Returns (8Can51) perfected this very day and dates are listed, upper left, and highlighted in green. Amazingly, Trump's natal Mercury, planet of young people, precisely opposes Maxwell's natal Mercury (8Cap51) to the minute. At the top is the rounded-up Sabian Symbol for Trump's natal Mercury - "9 Cancer" = "A Tiny Nude Miss Reaches Into the Water for a Fish" - and I don't care to think about what this may imply in relation to such criminal activities against children. However, one of Trump's favorite words comes to mind: disgusting.

Also of interest is that in his Mercury Return chart for July 2, 2020 there appears a YOD pattern of crisis (also a health indicator), aka, a Finger of God pattern. It points toward the Moon - this morning @6Sag34 and rounding up to '7 Sag' we have "Cupid Knocking at the Door." Does this symbol refer to Maxwell's arrest (his crisis) and/or SDNY prosecutor Audrey Strauss who, in a sense, knocked at Ghislaine's door this morning about Cupid-related issues? Is Audrey Strauss still employed and for how long?

Also penned on are the three-fer dates of Maxwell's current Saturn Return/s and considering Saturn's realm of legal affairs and the law, I'd say she's having a demanding Saturn Return wouldn't you?

So if you need the natal data (RR; AA) of Ghislaine Maxwell it's penned on the chart, lower right, and highlighted in a magenta-pinkish color, plus, there's a link to her chart, above. Her Earth-Fire Sun Capricorn-Moon Leo personality blend tends toward social climbing, snobbishness, a dictatorial demeanor, and self-centeredness but I suppose this can be no surprise. And now that she's been taken into custody and release on bond is questionable due to flight risk, perhaps the 'Image for Integration' for Cap-Leo that most closely applies is,

"After a lone, silent climb up your mountain you greet the spotlights and television cameras with flair and aplomb." Somehow, I know she will.

Trump, it seems, draws women with prominent Capricorn in their charts to him: current wife Melania has Moon in Capricorn, ex-wife Marla Maples has Cap Rising. Don't know what that means, but it's interesting.

Ghislaine Maxwell, meanwhile, took her Capricornian ambitions and ran with them in the wrong eighth-house direction. Capricorn is not bad, eighth house is not "bad," but it seems that Maxwell couldn't combine her Capricorn ambition and drive with the sex-and-underworld energies of the eighth house in a healthy way, to say the very least. Her chart could easily have been that of a detective, or writer of mystery novels (Gemini Asc), or an oncologist, but no, she had to pimp out kids to her famous friends. Now it remains to be seen whether she will sing her heart out or meet a messy (eighth house) end...

TY Crystal D total agreement here. Apparently Trump requires ambitious women. Now I don't wish a messy end on Maxwell but hopefully she'll have a chance to sing before it occurs if it does. Actually some have said she's already been singing to the FBI who have known where she was all along. If so it also remains to be seen whether the public will ever hear any of her info such as names of the (depraved) powerful. The entire situation is very lowering for our country isn't it? And I won't be surprised if murder is involved in more ways than we currently suspect. After all, "Whatever Trump Touches Dies" as Rick Wilson has said. :( Jude