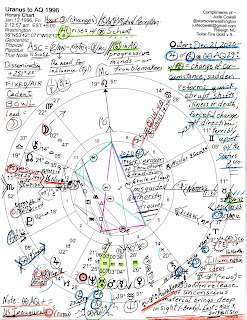 DC Horoscope: Uranus to futuristic Aquarius January 12, 1996 2:12:57 am est Washington DC; Hour of the Moon (changes, fluctuation) which leads a BOWL shape of planets; 1996 Sun and Neptune @25Cap06 have been 'met' by the 2020 Capricorn trio of Saturn, Jupiter, and Pluto, here in the 3rd house of Communications (Technology!) which, combined, suggests potentials for dreams come true vs the grim face of reality (Saturn), fanaticism, paranoia, scandal, pretense, bankruptcy (Jupiter), Civil Rights struggles, control issues in the realms of politics, economics, society, and religion (perfect timing for Jupiter-Saturn's game-changing input), and/or the illusion of power, or power that erodes over time (Pluto). It all sounds familiar, yes?

The 1996 Uranus to Aquarius Ingress Horoscope is posted here because of the Winter Solstice 2020 Great Conjunction (or, Great Mutation from Earth to Air, if you prefer) of societal planets Jupiter and Saturn for the pair will also conjunct 1996 Uranus @00AQ+ then and thus create a midpoint picture of potentials (listed on the chart, upper right) for shifts, changes, and reforms. And noted in 3rd house are Jupiter and Saturn 2020, highlighted in blue, and Uranus 1996 highlighted in green.

Additionally, in the center of the horoscope a few potentials are listed for 2020 Neptune in Pisces conjunct 1996 Saturn (@20Pis14, 4th house) which transit Neptune has done off and on of late and will again, plus, the Prenatal Solar Eclipse ('PE'; highlighted in red) of the 1996 Ingress event is in 12th house @00Sco17 in the 16 North Saros Series with its themes listed, lower right. Basically, 16 North = 'Illumination of ideas' and the Collective rising up of 'unconscious material and insights' (Brady) thanks to the vibes of Uranus-Neptune (with their NWO, Illuminati implications) with The Enlightenment pair of planets moonlighting as 'New World Order' heralds of visionary idealism, awakening, (or, loss of consciousness), higher planes of knowledge, mysticism, the occult including Astrology, illusions, disguises, and/or the possible use of underhanded methods. (As you know, Uranus and Neptune conjoined three times in Capricorn all through 1993 where 2017 Pluto activated their 'Big Picture which must be followed' potential.)

Now prior to January 12, 1996, about 84 years earlier, transit Uranus entered its own sign of Aquarius on January 30, 1912. A busy year, 1912 brought several Uranian-style events of novelty, new beginnings, suddenness, and/or shock such as: the establishment of the Republic of China (January 1), New Mexico (January 6) and Arizona (February 14) becoming 47th and 48th states, a Suffragette Parade in NYC (May 6), US Marines landing in Cuba (June 5), the eruption of Mount Novarupta in Alaska (June 6-8), the RNC nomination of Taft (June 18) and the DNC nomination of Wilson (June 25), US Marines invasion of Nicaragua (August 4), break-away progressive Republicans forming the Bull Moose Party and nominating Teddy Roosevelt (August 5), an attempt on Roosevelt's life while he was making a speech in Milwaukee (October 14), the first novel in the series Tarzan King of the Apes, and quite a bit more.

So will the 2020 activation of rebellious Uranus by the combined energies of Jupiter and Saturn in December 2020 be noticeable or merely an unconscious blip for us all as we fret over the future? Might the planetary trio reflect a 'history rhymes' condition in society or signify absolutely nothing at all? Or, because of the unpredictable nature of planet Uranus can there be reliable answers to such pertinent questions at all?

Well, to me it seems that if Uranian energies are activated in or around December and do express in noticeable ways (echoing any events of 1912 or 1996 - or not), we must wait patiently to see if astrological Uranus follows its usual erratic course and acts early, late - or never. Yet beneath it all, it's possible that the 'new order' or 'reset' implications of the Jupiter-Saturn Conjunction could combine with 'Age of Aquarius' Uranian vibes and boost the old world into 2021 with something like, say, A 'Great Reset' Agenda manipulated by the World Economic Forum at Davos in January.

If so, my suspicion is that that high-handed agenda (aka, the 'Big Picture which must be followed'?) is what the calamities and purifications of 2020 have been preparing the world for. Whether we like it or not.