Can a Past Eclipse Spotlight 2020 Conditions? 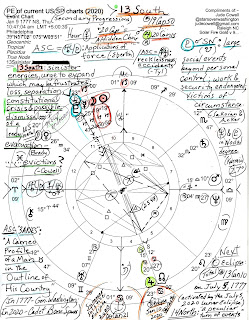 July 22, 2020: Once again I'm attempting to show that a past Solar Eclipse (January 9, 1777 @19Cap50 in the sinister 13 South Saros Series) can continue to describe conditions and events in the US by way of Secondary Progressions along with the real-time eclipse horoscope itself when triggered by current transits. Yes, I've written about this 'history rhymes' situation previously but today a view of the actual 1777 Solar Eclipse Horoscope may add to the picture in relation to current events and is based on Astrology's day-for-a-year method of progressions.

The horoscope for America I've used for today's Secondary Progressions ('SP') is the July 4, 1776 5:09 pm LMT Philadelphia, Pennsylvania version though of course other versions may be used as well. If you progress the US horoscope to today's date and check out its 'Prenatal Solar Eclipse' ('PE') you'll see 19Cap50 listed, and in real time that's the January 9, 1777 13 South Solar Eclipse you see pictured, above. Naturally, eclipses in Saturn-ruled Capricorn involve control issues, authority figures, and one's relationship to them. Plus, the negative qualities of the sign such as greed, avarice, coldness, ruthless ambition, and selfishness must be avoided if karmic progress is to be made. Obviously, these negative qualities now shown by regressive Authority Figure #1 and his anti-government, anti-constitutional, anti-humanity enablers are blocking the progressive policies that would improve conditions for the American people and would put corporate bad actors back on their heels. However, consistent efforts must be made along with the correct use of resources (eclipse in Earth). Again, the current regime interrupts what should be our progress, plus, with Jupiter opposing the eclipse, ethical and moral standards must guide and be upheld if we wish to succeed in any significant way. In 1777 General Washington possessed such a character. In 2020 we are hampered by certain low characters infesting and sabotaging our country - in a word, traitors. (See chart, lower left corner.)

For pandemic influences, see upper right (deadly Pluto conjunct the karmic South Node) and consider all the diseases that afflicted the Continental Army. Karma is also shown by Neptune and Pluto (a combo with criminal intentions, or, the use of drugs, the occult, or spirituality) for both are at Nodal Degree, an indication of fate at work, along with interceptions across the 6/12 axis of the victim-savior Virgo-Pisces polarity (yet a different house system might mitigate this particular karmic factor). Personally I think it belongs considering current Virgoan-Piscean conditions and the fact that the 6/12 is involved - health, hospitals, military/police/civil servants, karma, hidden enemies, etc, the very concerns we now struggle with.

So as you can see, I've followed my bad habit of squishing a bunch of study notes onto the image (please enlarge or print to read) but below I will add in this text the themes of 13 South Eclipses since my assertion here is that our nation's current conditions and potential events in 2020 are hereby described in part by 13 South themes 'running in the background' of society and basically unconscious. With US finances in turmoil and congressional disputes over bail-out funds, 1777's Jupiter Rx @20Can15, a critical-crisis degree, is significant and opposes the eclipse (19Cap50). In early 2020, a cosmic time link was formed when this degree and planet were 'eclipsed' on January 10, 2020 by a Lunar Eclipse conjunct Castor. Now as you know, fixed stars are most expressive when eclipsed and Gemini Twin Castor suggests either super creativity, a loss, and/or murder. (You can see the January 2020 Lunar Eclipse notated near Jupiter Rx in 4th house.)

Also notated on the chart and conjunct its IC (the Foundation or Basis of the Matter) is a major cosmic time link which also 'knits together' 1777 and 2020: the
Summer Solstice Solar Eclipse of June 21, 2020 @00Can21, a Cardinal World Point of global manifestation, and its eclipse themes which we're now experiencing until the next Solar Eclipse on December 14, 2020 (or up to 14 days prior) @23Sag08 in the 4 South Series.

We should also mention that, although it's not officially a YOD pattern of crisis, turning point, a crossroads, health problems, and/or a karmic spiritual opportunity, the Neptune-North-Node sextile points toward Venus (26AQ34 in the karmic 12th house) which also happens to conjunct US natal Moon (We The People). The Neptune-NN pair relates to a lack of community spirit and their sextile of subtle evasion forms the base of a YOD for those who use points or angles other than planets. YOD or not, we have potentials of some midpoint pictures to consider which include Trump's natal Mars (26Leo) for it opposes 1777 Venus and US natal Moon (1776):

Now here are the themes (via Brady's Predictive Astrology) of the 13 South Solar Eclipse that I believe now have influence upon society as shown by cosmic time links and by 2020 transits, particularly the Capricorn trio of Jupiter, Saturn, and Pluto:

13 South Themes: 'sinister energies; urge to expand which may be frustrated; loss; separation; constitutional crisis and possible dismissal of a leader' (General Washington avoided dismissal but will Trump?); and/or 'evacuation' (Brady). To 'evacuation' I regretfully have added, evictions since many Americans are being unfairly threatened with it by a corrupt administration and a Republican-led Senate so often derelict in its duty.

As for Trump's violent intentions against peaceful protesters, you see notated one factor: Ascendant = Uranus-Pluto: 'applications of force' (Ebertin). By transit, the current position of the Uranus-Pluto midpoint in mid-Pisces opposes and activates the Great Conjunctions in mid-Virgo of revolutionary planets Uranus and Pluto 3 times during the mid-1960s and the Civil Rights Movement and again we see street protests and instigators sent to disrupt the peace and muddy issues.

Yet if we look up and beyond our earthly trials for only a moment, we may find the Sabian Symbol of the 1777 Solar Eclipse degree of '20 Capricorn': "A Hidden Choir Singing", a lovely word picture described by Marc Edmund Jones as, "a symbol of the eternal music of the spheres" and its positive expression of: "a unique gift for establishing a common interest and making it a power for the good of all"!

Note: If this is not your first visit to Stars Over Washington and you're fond of historical eclipses (because who isn't?) perhaps you recall that we've discussed the July 1777 Solar Eclipse in the 14 North Saros Series in a previous post: Is This a Haunting Eclipse from 1777? For then as now, it was difficult days for American Patriots fighting to establish this country, and today we must fight to preserve it.