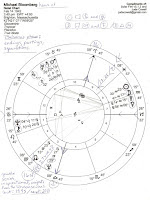 
This is the natal chart of an egotist, who's good with technology, and may have occult leanings, but let's talk amongst ourselves while Bloomberg's Sun AQ-Moon AQ personality blend says he is friendly but detached, independent and gregarious (Jupiter in Gemini loves to converse and has helped him with his early understanding and expansion of technological advancements in his businesses), is highly observant, clear-headed, and well-meaning. (Seems to be reasonably well-meaning for an egotist--we'll see.-jc)

Yes, Michael Bloomberg is a law-unto-himself who wants to do things his way. (A perfect description for you-know-who in the Oval Office circa 2017--?:law under to himself?-- another one worse than the first!-jc)

This pair's dark side has a tendency toward making blunt, insensitive remarks due to comparing people to closely-held ideals. Disliking restraints of any kind, this blend tends to "live in the head"--this is a highly inspirational combo and is supported by Bloomberg's Pre-Natal Eclipse Series (PE) which for him is 16 North, a gentle series having to do with 'unconscious material rising and bringing along with it great insights and good ideas which may be profitably acted upon' (Brady's Predictive Astrology.

For Mr. Bloomberg a 16 North eclipse occurred prior to birth (his 'PE') at "28Virgo": "A bald-headed man dominates a gathering of national figures"...Keyword: DOMINANCE--

positive expression: accomplishment through a completeness of self-mastery and a rigid control of others; negative/shadow side: a sadistic sophistication.

Note that a cosmic time link was formed by a Solar Eclipse conjunct the same degree (29Virgo) on September 22, 2006, in the 8 South Series with themes of 'separation, loss; to be finished, sad partings' (Brady).

Well there's a peek at Bloomberg with more to come--he doesn't have to declare his presidential aspirations until May 2008 so the twists and turns of fate and his own nature--plus, the chaos principle--will intervene in unforeseen ways. (Update 11/08/19: as you know, his 2008 campaign didn't last long. Now in 2019 Bloomberg is belatedly toying once again with a presidential run which is why I have today updated this post.