'Coincidentally' I ran across Coincidence Theory: Television and Mind Control which details the mind control potentials and occult links of the congressionally mandated analog-to-digital switch that shoved the US 'across the Digital Divide' as of June 12, and opened up frequency bands to make room for RCA's dog to hear its master's voice more clearly.

On July 21, I published The Real Reason Behind the Digital TV Switch to make note of governmental chip-implant technology and the 'master's voice' theory as we're tracked by our every move and purchase, and subliminally contacted through TV viewing.

Digital signals broadcast far more data to our brains within a shorter period of time, you see. Groovy for them, a dangerous slippery slope for us.

You're welcome to skip my blabs on the subject, but do check out Eric Nordstrom's article linked above...for instance: did you know that TV's original cathode ray tube was invented in an attempt to reach the dead? (Even though the dead are 'unconscious and know nothing'!)

Or that master occultist, satanist, and sex/drug fiend, Aleister Crowley, has a possible connection to Barbara Bush through an extended visit to France from her mother, Pauline, who had a 'wild side' and may have hung out with Crowley while there. (They shared mutual friends.)

If you're like me reading this, you think, 'Why am I not surprised?' Crowley, famous for his "Do What Thou Wilt" creed and for 'sexual magick' is possibly Barbara Pierce Bush's papa!

Mrs. Bush was born on June 8, 1925 in Rye, NY, so the possibility is there since her mother Pauline returned to America in Oct 1924 from her European trip. Premature birth is, of course, possible as well, yet given her mother's traveling schedule, this would have had to be the case if Marvin Pierce fathered Barbara, his child #3.

Mrs. Bush's natal chart is Rated A 'From Memory' in the AstroDataBank files; Crowley's has been rectified by several astrologers, including Marc Penfield; this version has a Rodden Rating of B.

So are there indications of mysterious parentage in Bush's natal chart?

Here is a bi-wheel image with Crowley's natal chart in the center highlighted in orange; Bush's chart is the outer chart, highlighted in green. Two of AC's midpoint pictures are notated, lower left...one a T-Square, one a YOD.

A Mystic Rectangle is listed for him as well between Sun, Saturn, Uranus, and Mc, and interestingly, his 1st house Uranus 19Leo08, has this Sabian Symbol for '20Leo':

"American Indians Perform a Majestic Ritual to the Sun." Click the 'papa!' link for a few details about the rituals that went on in France in 1924 and you'll know why I mention this Symbol. 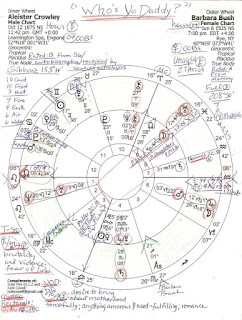 Links of a conjunctive nature have been circled; please click image to enlarge for notations scribbled upon the chart/s. You'll notice a link for the following between BB's Uranus and AC's Moon 22Pis48 which falls in his 9th house of Foreign Travel:

Bush's Ic, the Foundation Point of the chart and house of roots and heritage, is at 17Pis05, and whenever Neptune (or Pisces) are associated with the Ic/4th house there are questions regarding parentage (and/or alcohol and other drug implications.)

Plus, Jupiter is the primary ruler of Pisces so a 'guru' figure could be implicated - and the disruptive creative sparker Uranus is posited in her 4the house at 25Pis17. At age 84, Mrs. Bush is in the midst of her Uranus Return as this odd story reappears on the Uranian/Neptunian Web.

If a parental link is true, how ironic: daughter of "The Wickedest Man Alive" (in his day; his big seller was Diary of a Drug Fiend, 1922) marries another wicked man (Bush Sr, said to have been friend of Anton Levay, founder of the church of satan), then she births yet another wicked man, both of whom become presidents of the United States of America, a nation often called in the Middle East, The Great Satan.

Coincidence Theory, anyone?
Posted by Jude Cowell at 2:54 PM