Are you aware that Maoists are terrorizing parts of India? Well, I wasn't and am saddened to hear of it.

In fact, I have missed the ball on the Naxalites all together, lucky you're there to guard my back on the throw. Turns out, the Maoist political party was founded on September 21, 2004. It was in mid-August 2004 that Pluto and Chiron were parallel for two days and of course, Pluto/Chiron is the epitome of disenfranchisements of all kinds with oppression tossed in to make certain those victimized go down and stay down.

(Parallels may be used as timing devices in Astrology and are similar in nature to a strong conjunction.)

You will notice, if you click on the Maoist info link, that 'Sept 21, 1967' falls under the spell of the major Great Conjunction which defined the energies of the 1960s: Uranus conjunct Pluto.

My point is that astrologers tend to look at the beginning of planetary cycles to see where in that cycle the same planets are on a particular date. Similar themes, issues, and concerns will come to the surface especially during 'quarters' times...the waxing squares (90 degrees, crisis in action phase), the opposition (180 degrees: stand-off, culmination, and/or partnership), and the waning square (also 90 degr, crisis in consciousness phase.)

The long-term Cardinal T-Square pattern (Spring 2010 - 2014/15) contains within it the ongoing Saturn-Uranus cycle now at opposition phase off and on, the Saturn-Pluto cycle, now at waning square phase (Libra to Cap), and the Uranus-Pluto cycle, now approaching exact square (partile) with one another in this their dance of shockingly deep energies. As Uranus screeches across the Aries Point from sedate, surreptitious Pisces, 'scientific breakthroughs' will be announced or discovered (as noted on this blog previously as, Uranus = AP.)

Once again the Saturn-Uranus puzzle of old vs new supports the prominence of the current Uranus-Pluto square - it is the most prominent of the titanic battles going on over our noggins for it is the rarest of those now in play. Aries, the first sign of Spring, the pioneering adventurer discovering and claiming new vistas -vs- Capricorn, the manager, so set in his ways and fond of tradition, status quo, and gilt-edged securities.

So we are now called upon the deal with and hopefully successfully manage the energies of the crisis in consciousness phase of the electrifying, stupefying Uranus-Pluto Conjunction of the 1960s with all the issues, themes, and record albums of the day. Oh, and the protests, demonstrations, and riots from those days, too.

This is well the time to get questions of equality and freedom right! 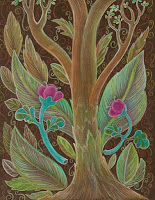 image: Flowers of India.
Posted by Jude Cowell at 7:08 PM

But before Uranus leaves Picses for good, I wonder what its retrograde conjunction with Jupiter retrograde at 28.43 Picses in September, and its direct conjunction Jupiter at 27.02 Pisces January 4, has in store for us.

BTW, Friday is N____ D'Alessandro P_____'s 70th birthday. Does anyone have the birth time for the Speaker's birth in Baltimore?