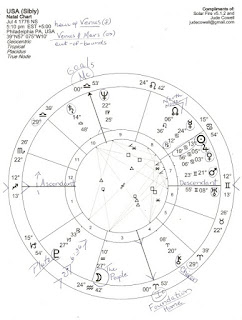 Yes, it's year #234 and barely counting, considering what politicians and bankers have done with the place - their private cash cow apparently.

Well, just in time for 2010's July 4th festivities, some bad news not wholly unexpected has arrived concerning the recent 8-year era of US expansionist and war speculator, George Bush: he's been ranked by presidential scholars as the 5th worst president in US history, with President Obama ranked 15th from the top of this year's list.

Yes, war hawk Bush is ranked in the bottom five as is Franklin Pierce with whom Dubya shares family lineage. And Poppy Bush doesn't fair very well either which gives me some small hope that hoards of discerning Americans will nix any future presidential hopes of candidates from this particular gene pool.

That's about as gently as I can put it so early in the day while listening to the second reading of the morning on NPR of the Declaration of Independence. The horoscope above marks the day with expanding Jupiter as chart-ruler during a Venus Hour, both planets relating on one level to money and its pursuit.

Now to be fair, President Pierce did have the unfortunate distinction of losing his 11-year-old son in a horrible train accident just two months before inauguration which had to be a nightmarish-beyond-belief way to begin a term in the White House.

And perhaps the person writing on Wikipedia concerning the presidency of Franklin Pierce had Dubya in the back of his/her mind when he/she typed:

"having publicly committed himself to an ill-considered position, he maintained it steadfastly, but at tremendous cost to his reputation."

With Bush, it seems that nature and nurture supported one another during his disastrous presidency with "At least we know where he stands" the popular sentiment with the end of the sentence being, "even though he's wrong."

Well, if history turns out to be 'kind' to George W. Bush as John Ashcroft once panderingly intoned, its pages will have to be very creatively rewritten down to the last period if it hopes to disguise the misery, loss, and teeth-grinding inspired across the globe by the stubborn-willed presidency of you-know-who (with the enabling of his elite backers, his "base" as he called them.)

May this be the final time I publish a photo of this man who had to cheat to 'win' the presidency of the United States of America, with the end of the sentence being, "cheating isn't winning, it's stealing."

On the chart image I failed to note that along with Venus and Mars, our Pluto in Capricorn is also out-of-bounds.
Posted by Jude Cowell at 6:25 AM