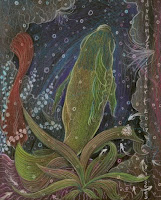 Missing her aim at The Duke by over a hundred miles, newly minted Republican slash Tea Party candidate Michele Bachmann rushed from the starting gate only to compare her campaign 'spirit' to that of rapist and serial killer, John Wayne Gacy.

Yes, the GOP-esque crew of Gingrich, Cain, and Bachmann already seem to be having trouble keeping their political pushcarts on track for a win! But their antics and off-the-cuff remarks do make great distractions for the press, don't they pardner?

Well, here's a brief peek at Bachmann's natal chart placements if you're interested in a fathom.

Then perhaps a comparison with Gacy's natal chart? The murky, obsessed fellow was born on March 17, 1942 in Chicago Illinois with a Sun Pisces-Moon Pisces personality blend and definitely demonstrated to the world the downright lowest of the lower side of the sign of the Two Fishes.

You may even wish to snag a view of John Wayne's May 26, 1907 natal horoscope, as you wish, with his Air-Water Sun Gemini-Moon Scorpio blend.

And funny thing, on Monday, as Michele Bachmann fit her foot squarely in her mouth over the wrong 'spirit', transiting Mars conjoined movie icon John Wayne's natal Sun 4Gem19 which brought The Duke more public attention than he's received in quite a while!

Above image from my Dreamyfish Art collection of very fishy botanical drawings: Pisces.

By the same person- Connie
http://www.imf.org/external/np/seminars/eng/2011/res2/pdf/crbs.pdf
IMF plans for us.

Thanks for the link! jc