Set for the White House, Washington DC, here is an image of September 27, 2011's New Moon @ 4:00:16 Libra rising (ASC 4Lib51), with the lunation as part of a Cardinal Grand Cross here perfected by US natal Jupiter 5Can56 at Midheaven (The Goal, or WHY? Point.)

Natal Jupiter @ '6Can' = "Game Birds Feathering Their Nests" is the WHY? A new cycle of activity (New Moon on ASC) is the WHAT? HOW is Pluto breaking down systems and structures in Capricorn, and the WHERE? is apparently Utopia (Uranus in Aries on DESC.)

The New Moon perfects during an Hour of Mars 5Leo05 in 10th house of Public Status and Career, conjunct US natal North Node which indicates encounters with martian people or events; chart-ruler Venus 15Lib21 in 1st house and just past US natal Saturn 14Lib48 which is the first US natal planet to rise in the New Moon chart.

This indicates issues of legalities, austerity, responsibility, potential loss, and accountability. Accountability issues are seconded by asteroid Hera at MC (keeping or balancing accounts) and financial matters are prominent. 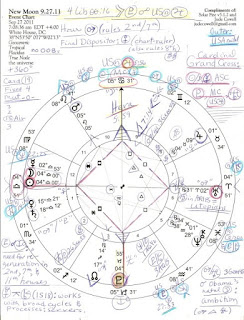 As you see, Jupiter Rx in Taurus, a money sign, is posited in 8th house of Shared Resources, Big Business, Corporations, Banking, Debt, Credit, Insurance, Legacies, Transformation, Death, and the Occult. The Neptune/Pluto pair has links to the supernatural and the occult as well.

For the sake of brevity, this analysis of the new cycle of activity beginning on Sept 27 will be primarily focused on midpoint pictures, aspects, and other links to the New Moon itself.

Chart-ruler Venus makes only one applying aspect (how things will proceed)--a conjunction with Saturn which happens to be conjoining US Secondary Progressed Mars Rx. Serious meetings are indicated along with mixing business with pleasure, working in isolation, and/or appreciating a need for better organization and structure.

Two applying aspects to the New Moon are telling, one that is separating (waning) indicates a past event or unconscious inclination--here are a few potentials which may come from the New Moon in Libra, sign of Partnerships and Legalities, but which also has war and conflict connotations:

With US n Jupiter at MC and triggering/completing the T-Squares into a Grand Cross pattern, we know that idealism, finances, religion, higher education, war (Jupiter the General), courts, and other 9th house matters that Jupiter rules are particularly of interest in this New Moon horoscope, with business, self-protection, and security intimately involved (Cancer.)

Yet the separating opposition from radical Uranus 2Ari31 Rx may also relate esp with Uranus still affected by the transiting Jupiter/Neptune midpoint, the speculator-wastrel-grand schemes-inflationary pair of planets which conjoined one another upon our US natal Moon--we-the-people--in Aquarius all through 2009 creating an 'involved in speculation/instability' vibe. (Jup/Nep = Uranus: reality v imagination; coming down to earth with a bump; sudden recognition of a difficult situation--Ebertin.)

Please click the chart to enlarge for more details including America's natal planets which are penned around the outside of the chart and highlighted in an aqua color.

Since there's so much dynamic energy with the planetary pattern, let's consider the midpoint pictures formed by the US n Jupiter-completed Grand Cross--any, all, or none may apply:

n Jupiter/tr Pluto = Moon: a desire to bring about social improvements; influencing the masses/the public through an appeal to the emotions (uh oh--that's now the US government always gets Americans to go to war--jc); a successful use of psychology.

(Interesting that 'prudence' was one of Bush Sr's signature words, and this New Moon shows the difficult Mars/Saturn midpoint sitting upon Poppy's natal ASC = possible health threat; separation; mourning. Also, Saturn 18Lib12 has just conjoined his natal Moon, also not a good portent for health issues, and his n Pluto in Cancer is at MC. Oh, and by the way: NN 17Sag14 in 3rd house of the New Moon chart is pointing toward Dick Cheney's natal Mars and as you know, Cheney's recent book has stirred up controversies over his role in 9/11 and his war crimes.)

Uranus/ASC = Pluto: a desire to attain success even under the most difficult circumstances.


Also of interest to our New Moon/new cycle topic is the Sabian Symbol for Mercury '3Lib' with trader Mercury in the 12th house of Politics, Secret Deals, Self-Undoing, and Karma:

"The Dawn of a New Day Reveals Everything Changed"...'INNOVATION:

Keynote: The ever-present possibility of beginning again on a new foundation of values.'

Yes, but it's which values and what kind of 'new foundation' that concern this American.

All midpoint pictures today are from Ebertin's The Combination of Stellar Influences.

'3Lib' and '6Can' are from An Astrological Mandala by Dane Rudhyar.


Blog Note: once again, Blogger is 'disappearing' parts of my post as I type/save (some I have no time to put back), and SpellCheck goes out and in. Hopefully all will be displayed and correctly spelled once this post is published. Very annoying and time-wasting, Blogger! jc
Posted by Jude Cowell at 12:39 PM

The PTB have penchant for using magic. This astrological forecast, should it be correct and I expect it is, points perfectly to the timing of the EVENT the DARK CABAL have been planning to steal our attention again.

I say we make our own plans and not participate in their "drama."

Excellent idea: if we ignore them as much as possible it should annoy them no end, thanks.

DC politicians look more & more like the marionettes they are, don't they? And all the drama around a gov shutdown (again, this Friday) is meant to make us throw up our hands and say, the US gov "doesn't work anymore--guess we need a one-world-government" which is tossing out the baby w the bathwater when it's really only our sorry, anti-gov political babies we need to throw out, then elect people for public office who care about American sovereignty.

Of course, then NAFTA, CAFTA, GATT, (and newer 'free' trade agreements which are more like Treaties than they wish us to know), WTO, IMF, and World Bank shills and planners will have to be jettisoned from Washington as well--which is ok by me because I prefer America. jc