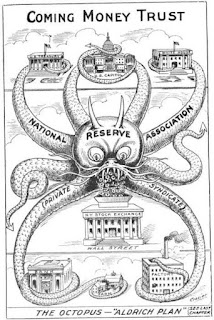 Here's a blast from the past, a 1912 cartoon warning against the banker-supported Aldrich Plan which opened the gate for the creation of the Federal Reserve Bank of the United States, a central bank such as President Andrew Jackson was so determined to root out of the American system for he recognized them for the illuminized government take-over artists they were.

As you know, the Bankers' Panic of 1907 was used as the justification (cover) for setting up a central bank the likes of which have orchestrated financial booms, bubbles, busts, and crashes ever since. Click the link to view a 1907 photo of Wall Street at Federal Hall--it favors current Occupy Wall Street gatherings.

Pluto/Chiron = plutocrats, their agents, and other oppressors

In America then as now, when you set your eye on inhabiting the Oval Office, you must play ball with the big boys of the Pluto/Chiron persuasion. In fact, in the January 20, 2009 Inauguration Horsocope, the transiting midpoint of Pluto and Chiron sits precsely upon the MC, the Goal/Aspiration point of the chart.

Later on, after you accept Pluto/Chiron's abundant gifts for doing their bidding, you may suffer a measure of remorse for accepting their backing for the piper's tune becomes shriller than promised, the dance more frantic, and the required task more distasteful than initially expected.

Here's what Freemason Woodrow Wilson said after he'd allowed America to be snookered into creating a royalist, plutonian, oligarchic Federal Reserve Bank, a private enterprise that runs the US government yet is not a federal institution at all.

Plus, here's an article which lists banking industry contributions to 2012 candidates which shows Mitt Romney in the lead amongst big bankers: The Big Wall Street Banks Are Already Trying to Buy the 2012 Election.

Then I'd say global bankers have achieved their take-over goal quite handily like an octopus squeezing the life out of its prey while our complicit presidents look on.

In spite of all anyone can do, a new political limerick has been published so if you wish a quick peek Mitt Romney 2012 awaits you! jc
Posted by Jude Cowell at 9:02 AM