May 2012 Eclipse to NWO natal horoscope

In a previous post, the horoscope of the May 20, 2012 Solar Eclipse at 00Gem21 conjunct Fixed Star Alcyone was on display (click image to enlarge the chart which is set for Washington D.C.)

And you may wish to read the bit I wrote in 2007 about the NWO natal horoscope, plus, here's a re-publish of the chart as it was posted in 2007--click image or magnify your browser for closer viewing: 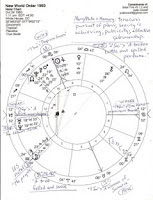 Note the NWO's Mars-Mercury-Pluto line-up in secretive Mars/Pluto-ruled Scorpio, sign of spies, agents, and Big Businesses such as Banking and Weaponry--and that NWO Pluto conjoins the May 20, 2012 Solar Eclipse horoscope's Ascendant set for D.C.--and vice versa. This feature that stands out clearly between the two charts (May 20, 2012 v October 24, 1993, #3 of the *Uranus/Neptune Great Conjunctions) for it shows a double Pluto/Ascendant synchronicity of which you may want to be aware since the themes of the May 2012 Eclipse affect the rest of 2012, at least or until the next Solar Eclipse of November 13, 2012 @ '22Scorpio'--which falls amongst the natal Mars-Mercury-Pluto trio in the NWO natal chart.

The November 2012 Solar Eclipse is from the 15 North Saros Series with a "joy through commitment" theme (Brady's Predictive Astrology) which doesn't sound too awful, does it? Unless bossy Uranus/Neptune types make it so. Yet as you know, any eclipse in the sign of Scorpio has a fated undertone to it.

So let's consider what Michael Munkasey has to say about the combination of (powerful, subversive, wealthy) Pluto and Ascendant, the WHAT? Point of any horoscope. We may assume that plutocrats, both American and --other-- will be active on certain levels which may be described by the following in the realms of Politics and Business:

Thesis: focusing consciousness on elements meant to do harm to others; space colonization (ISS? jc); inspection of waste disposal procedures; ID and reversal of potentially destructive ideas or attitudes;

Antithesis: introducing immoral or profiteering ways into practice (they've done that already but there must be more--jc); natural disasters that strike without warning; psychotic or self-destructive reactions; pollution or poisons; global trends for the environment.

What a nice bunch of evil one-world-government psychotics.

Recommended: Midpoints: Unleashing the Power of the Planets, M. Munkasey.


*The NWO's Uranus and Neptune, The Enlightenment duo, met three times in 1993 at or near '18 Capricorn' = POLITICAL POWER (Rudhyar); negative/shadow side expression: smug or strong-armed paternalism (Jones) on:

Their cycle is approximately 171 years' duration and they last met in the 1650s in mid-Sagittarius (near US natal Ascendant in our national Sibly chart though America was only a glint in Francis Bacon's eyes) and during their time of Great Conjunction there was a telling New Moon @ 12Cap21 on January 2, 1650--'13Cap' = "A Fire Worshiper" (WILL TO TRANSCENDANCE--Rudhyar) which may relate to the 'Illuminati flame' over gravesites of certain martyrs such as JFK, MLK Jr, and Princess Diana, and to the 'Eternal Flame' of the Olympic Games.

For further reading on such topics try Crystalinks and note the reputed and ancient connection to Gnosticism.
Posted by Jude Cowell at 3:18 PM