Do you know that the May 5, 2012 Full Moon is called "Wesak" and as such celebrates Buddha's birth and enlightenment? For more info, please allow expert astrologer Dipali Desai to fill you in on that and more concerning the May 5 Full Moon which happens to manifest on Cinco de Mayo.

Plus, the May Full Moon falling in early Spring makes it the Flower Moon of 2012 so this lunation is simply full of meaning on many levels, isn't it?

One level is within the realm of Political Astrology and when the lunation horoscope is set for Washington DC, we find controlling Saturn 24Lib40 Rx (the Old Man, Task Bringer, Lesson Teacher, and the planet I often use to signify the Democratic Party which is older than the Republican Party though both their natal horoscopes contain Saturnian themes and traits, of course--and sometimes they switch roles between Jupiter's expansion and Saturn's restriction. In a phrase (politically speaking), checks and balances, the way the US government was meant to work.)

Now with Midheaven indicating the WHY? Point of any chart (or, 'The Goal'), we may expect issues of control, restriction, and delay to predominate, and for the Democratic Party to continue to be under attack by the GOP during this Campaign 2012 year. And of course, the May 5 Full Moon is the culmination-fulfillment stage of something begun at the last New Moon two weeks ago (April 21, 2012 @ 1Tau35, 3:18 am edt in DC, with NN '5Sag' at MC, and mid-Aquarius rising.)

Additionally, 10th H Saturn, its own house, is exalted in Libra, sign of the Scales of Justice (another 'balance' reference)--and with US natal Saturn in mid-Libra--we think of ongoing SCOTUS cases and the Justices veering to The Right (5 of them at the least) which is proving disastrous for our tattered democracy, what there is left of it.

Opposite Saturn is Mercury 24Ari51 conjunct IC (End of the Matter; The Drain; Real Estate: Homeland; Security v Public Status) showing Mercury/Saturn themes (serious business; dishonest people; philosophers-thinkers-planners) to those concerns and bringing in the influences of Mars 6Vir23 in 8th house and Pluto 9Cap24 Rx in 1st house; Pluto rising = major events out-of-personal-control?; Cap is ruled by Saturn, as you know, and Virgo is ruled by Mercury--Mars conjoins President Obama's natal Pluto in Virgo, as we've discussed previously (a karmic task to fulfill? issues of revenge, jealousy, big projects? weapons of war? nuclear issues? zealotry? any or all?)

ASC 00Cap35, a World Point of Manifestation, and one corner of the very active Cardinal Cross so 00Cap35 'fingers' the May 5, 2012 Full Moon as being more significant for America than Spring flowers blooming. This degree recalls Pluto's entry into Capricorn in early 2008 when tr Jupiter was in process of opposing our nation's natal planets in Cancer (Venus, Jupiter, and Sun)--just as Pluto was readying to do so, but more slowly. Financial and political concerns in the US were being opposed by tremendous powers in high (low, hidden, foreign) places--and still are, with US n Sun yet to be fully opposed (13Can/Cap = critical-crisis degrees); then later US n Mercury Rx @ '25Can' ("A Man Wrapped in an Invisible Mantle of Power") will be up against wealthy, powerful Pluto of the Underworld but not until about 2017 (using a 5-degree orb.) As I'm sure you've noticed or read elsewhere, year 2020 looks to be a doozy in the making, for this and other astrological, political, and societal reasons.)

Pluto entered Capricorn only weeks after the Great Conjunction of Jupiter and Pluto on December 11, 2007 @ 28Sag24 as the plutocrat-banker-wheeler-dealer duo met for a champaign toast on the very afternoon of a regular meeting of the Federal Reserve Bank of America--and within mintues of Fedhead Ben Bernanke walking to the microphone and delivering their royalist message to an in-process-of-being-heisted-from American people. Recession in the US began in December 2007 and times when the systemic cracks and fraudster robberies could no longer be kept hidden from the public with the full force of Jupiter-Pluto exploding in December 2008 near the very end of the Bush presidency.

Do you know I remain in a major snit of miffdom over their Big Heist? Because I do. Their historial bubble-bust pattern is clear. Yet if President Obama had done a lot more for Main Street and for struggling homeowners, I'd feel quite differently even though Politics is only Theater, dahlink, meant for public consumption, with the real deals happening behind the shadowy curtain. Actually, the June 5-6, 2012 Venus Transit may time a similar scenario when unusual or unsuspected alliances are formed or re-committed to--or are broken off. Watch for 'musical chairs' among national leaders as the Summer season nears--and odd or strange happenings with little if any explanation given for them.

So! Saturn as the May 5 Full Moon's chart-ruler does make one major applying aspect in the horoscope, a trine with evaluating Venus 22Gem21, in 6th house (DC) and conjoining US natal Mars, a time when desires are enhanced.

Now if only the desires of the American people carried an appropriate amount of weight with Washington politicians, the servants (6th H) we've sent there to do The People's business and bidding! Yet the 6th H also relates to military service and with the Mercury/IC degrees as they are (22--25 Aries), I always think of the natal MC of George W. Bush. And you know what quagmires he and his globalist pals got us into from January 2001 to January 2009.

Okay, that's almost enough Political Astrology chatting for today. Here's an illustration for what I hope is a very lovely and healing Full Moon for you and yours in Mars-ruled/Pluto-sub-ruled Scorpio, sign of secrets, but also of regeneration: 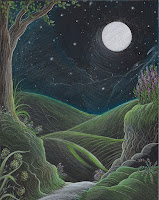 Flower Moon 2012; to view more pencil art mosey to my Jude Cowell Art Shop at Zazzle for merchandise like pillows and wall posters, Secret Moon Art for gallery views, or even Cosmic Persona Designs...if you're daring enough and over age 17.

Now here are the "Images for Integration" for the Sun Taurus-Moon Scorpio blend of the May 5, 2012 Full Moon--intense, successful, and celebrated:

Any of these sound like public figures past or present?

"Our country needs not heroics but healing; not nostrums but normalcy; not revolution but restoration."

No matter how Mr. Harding may have meant his prescription then (and politicians always seem to have a default script running in their backgrounds!), to me his sentiments certainly apply to the current kittens-in-string condition of the United States of America--compliments of our elitist political class, SCOTUS, and the banking behemoths who direct, and own, them all.