New Book on Saturn in Scorpio and "A Sight-Seeing Bus"

Today, October 5, 2012, Saturn moves into Scorpio from its sojourn in compromising Libra. Control is a major facet of the karmic planet of The Father, aka, the senex; other facets include: reality; fact; authority; authenticity; responsibility; accountability; restriction; constriction; boundaries; structure; status quo--and with the change from Libra, its sign of exaltation, we know that Saturn's concern with control is also one of Scorpio's primary interests or goals.

Enter master astrologer Donna Cunningham, who highly recommends a new book Saturn in Scorpio: Your Guide Through the Dark by Mandi Lockley which contains info on Saturn transits to planets and follows Saturn's often heavy footprints through the houses. How timely!

Now let's consider the Sabian Symbol of Saturn's degree today at its most Scorpionicness: 1 Scorpio:

Positive expression: a basic impersonality which capitalizes on the opportunity of the moment and helps reorder the situation whenever there is difficulty or dissatisfaction;

Negative (unconscious/shadow side--jc): a genius for avoiding any and every actual expenditure of self.

(The Sabian Symbols in Astrology, Jones.)

Now on this dark Saturnian topic we could mention a few cosmic connections to the October 3 Obama v Romney debate and the disassociation from truth that we witnessed. But why do it here, when so many are busily fact-checking for us?

Besides, we have a Scorpio Eclipse coming soon on November 13 @21Sco56 which conjoins the 12th cusp of Politics and Karma in the July 4, 1776 5:10 pm LMT 'Sibly' version of America's natal horoscope.

And since all eclipses have an ability to uncover or leak darkly hidden secrets, I wonder what tidbit or scandal may turn up on the peep-eye! menu for any and all political candidates as 2012 careens on?

Oh, and one more thing about Saturn entering Scorpio: The Taskmaster will conjoin the natal Sun of the New World Order @1Sco19! Here's a bit I wrote about the NWO natal chart way back in 2005 and here's a copy of the natal chart I published then with its birth date and time based on one of three Great Conjunctions of Uranus and Neptune (The Enlightenment planets) which occurred all through 1993: 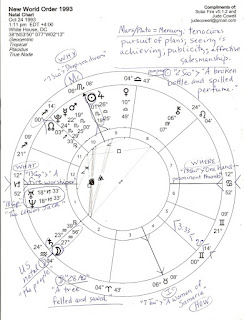 Pos: persistence in creative effort and utter fidelity to the inner essence of selfhood;

Neg (unconscious/shadow side): witless dissipation of every resource of self and society. (Jones.)

And turning all our public institutions into privatized entities that benefit the wealthy while implementing vast schemes upon the 47% in order to effect massive population control.