Horoscope and Hidden Dynamic of the American Revolution

The Horoscope and Hidden Dynamic of the American Revolution

With its change in political authority in mind, for ages I've meant to publish to Stars Over Washington the natal horoscope of the American Revolution (aka, "the shot heard round the world") when a group of patriots at Lexington, Massachusetts stood up to His Majesty's occupying soldiers who represented the British Crown, and our Fight for Independence from monarchy and oppression officially began.

Having fought British monarchists back once again (on November 6, 2012 in the shape of Mitt Romney, royal plutocrat!) and with the 112th Congress barely breathing and their maufactured 'fiscal cliff' negotiations at an alleged standstill, it seems bloggily fitting that today is the day. 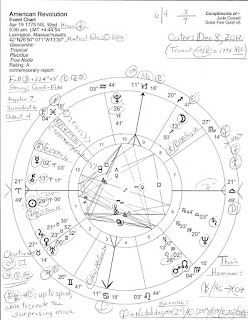 Shown here is the horoscope of the American Revolution, aka, the Battle of Lexington; Hour of Venus (23Tau52 in 1st house), chart-ruler Mars (ASC 21Ari49) squares Jupiter, Venus, and Uranus, a planetary trio which falls across the 2nd cusp of Earning Ability and Values.

As you see, 10th H Pluto @26Cap41, planet of power, manipulation, and control, is in the same degree (26) as battling Mars (the shooter) with Mars @26Leo13. Their inconjunct (150 degr) is nearly partile (exact) and applying (0A27.) A persecuting Mars-Pluto inconjunction (or, quincunx) describes a courageous challenger (Mars) who's grown weary of being someone else's 'workhorse' and Mars' bad temper results in explosive conditions which are made more burdensome by financial stress.

Plus, the square between testy, had-enough Mars and rebellious Uranus adds fuel to the flames of revolution and denotes fear of material loss, rash actions, and anxiety.

One obvious time link to our own era is shown by the position of Uranus @00Gem32 in a money house (2nd) because the May 20, 2012 Solar Eclipse @00Gem21 'hit' this Uranus of the Revolution while conjoining the current position of Fixed Star Alcyone (key phrase: something to cry about.)

So when I watch radical politicians of the duplicitously-named "Tea Party" and others behind the scenes tying our Congress in knots to prevent the business of the people being accomplished and to undermine our nation, it gives me something to cry about every day...for my country, and for You and your loved ones, Dear Reader. And as with the American Revolution of 1775, the entire world's future hinges upon what happens here.

Yes, there are many members of certain organizations who act--or fail to act--as they do now because they believe that they want the total downfall of America. But I suspect the promised rewards for their treason will be few and far between for the majority of them--and they won't like her replacement nearly as much as they imagine they will.

Now if you're curious about the hidden (occult) dynamic of the American Revolution, I include the following information from Nicholas Hagger's book, The Secret History of the West:

"The early dynamic of the American Revolution can be stated as follows: