August 2013: Saturn and Pluto in the New Millennium

In June 2013, I published the New Millennium Horoscope so that the chart would be available to you and me for future reference--for transits, progressions, etc. Click to view the chart and my original post with brief astro-notes.

Looking at tonight's transits (7.31.13) and with August at our door and the potential for further financial stalemates in Washington DC on the 2013 menu as Republicans continue their campaign to collapse the US government and make a 'new economic order' seem the only remedy (with the enabling of Democrats), I report to you two items:

1. That transit Saturn (austerity, restriction, delay, stoppage, loss) has for some time been conjoining New Millennium Mars (5Sco03) which is posited in the NM 2nd house of America's National Treasury.

This constricting, inhibiting transit denotes a time when taking shortcuts, circumventing rules and regulations, or not following the prescribed course are ill-advised tactics, and much determination is required for future success even if things seem to be progressing very slowly at the moment.

Actually, the stop-go frustration of Saturn-Mars indicates that more focus and organization are needed for this period involves temporary delays (Saturn) of action (Mars). Yet old man Saturn moving through the rest of the 2nd house will eventually oppose NM Saturn (24Tau34 Rx) in 8th house of Corporations, Debt, Credit, etc, when regrets about the past are encountered and must be considered so that what failed won't be retried; Saturn will also oppose NM Jupiter (2Gem10 Rx) when it will be time for the Haves to give back some of what they've gained in the past. And they'll whine and whinge most loudly, no doubt, even over their dishonest gains (Gemini is the sign of duplicity and Jupiter = bankers and money lenders.)

No, this isn't the best transit for financial endeavors with its continued belt-tightening, stop-and-go improvements, and delays, however, our obstructionist-infested America did have a Jupiter Return on July 22, 2013 (see sidebar to order a pdf of the full Report) so, though they may be off-and-on, some rewards are to be expected for new financial and political cycles have begun (ex: President Obama now back on the road and speaking about the economy and the Middle Class, something the GOP dearly wishes he wouldn't do.)

2. Transit Pluto is within orb of NM Sun (10Cap50) and has crossed the IC (Foundation) of the horoscope which signifies a time when total breaks from the past may be triggered. This supports the usual astro-analysis of transformative Pluto through Saturn-ruled Capricorn with its government-toppling ability. (Capricorn is the sign of law, too, so maybe the NRA's unnecessary 'Stand Your Ground' law/s can be toppled at some point!) Renovation, repair, and renewal of our Domestic Scene (4th house) are possible outcomes of this transit (exs: job-creating infrastructure projects funded, manufacturing concerns and urban areas revamped, offshore corporations return to the US.)

Transit Pluto to NM Sun echoes a similar transit during FDR's administration when the New Deal was instituted including jobs programs and other methods to renew our economy and benefit the American people (Pluto has extreme wealth hidden in secret places, y'know.) Pluto conjunct Sun indicates an even more aggressive drive toward power, and the courage needed to deal or cope with current circumstances which motivate our leader/s (Sun) to make a new start. Yet the past closely influences the present with Pluto-to-Sun and the duo's energies when combined denote on one level dangerous situations, yes, but also open potentials for sudden advancement, consolidating one's position, and/or the realization of new ideas.

These 'new ideas' we may hear within the public discourse, or even begin to see implemented, around the time of the November 2013 Solar Eclipse in Big Business Scorpio, the month when the US debt ceiling may be reached--or breached, and sore-loser Republicans threaten yet another shoot-self-in-foot government shutdown.

Look to your own natal chart for the houses where 5/6 Scorpio and 9/20 Capricorn fall--plus, any aspects these degrees and transiting planets make to your planets and chart angles--for clues on how these transits may be personally utilized.

Here's the New Millennium horoscope again so you don't have to click the link above to view the chart if you don't wish to: 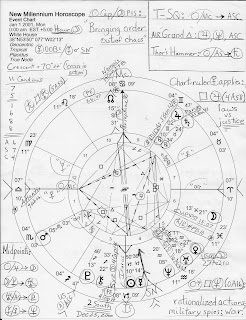