A natal horoscope for Modern Humanity (our era) may be timed by the Solar Eclipse of April 26, 1892 during the Great Conjunction of Neptune and Pluto in Gemini. The chart is published here on SO'W for anyone's future reference such as transits and progressions that affect its natal planets, angles, and other house cusps; some US natal placements are penned around the chart: 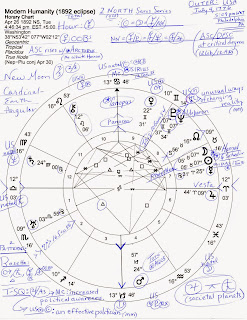 First, Venus squares Saturn Rx @24Vir00 in the 12th house of Politics, Large Institutions, Back Rooms, Karma, Self-Undoing, and Secret Enemies which denotes regrets over lack of money, wishes that once achieved may be disappointing, and neglect of burdens and responsibilities. Imitations of 'the real thing' may be prevalent and worry, anxieties, and obsessions too often permeates thinking particularly in relation to legal matters, relationships, and of course, finances. A preference for isolation and solitude may be noted and an antisocial quality is emphasized.

The only-planet-out-of-bounds condition of Venus, planet of relationships, romance, money, and evaluation, increases the isolation vibes of the horoscope and the general condition of humanity. You may wish to check out What If Being Single Weren't Stigmatized? and Marriage Not Included: The New American Dream?

Next, Venus inconjuncts the 4th house Mars @24Cap57 which further emphasizes relationships and romance (or the lack thereof). Venus also conjoins US natal Mars (desire for comfort and luxury) though in Business and Politics, it signifies the Venus-Mars duo's spirit of competition along with gaining satisfaction from fighting and from an exhibition of recklessness (as seen on TV?) (Munkasey). And of course, Mars (males) is in the 4th house of Domestic Scene which hints strongly at domestic disputes. Battles in Foreign Lands (I'm typing as an American, of course, since I am one) are also implicated by Venus and US natal Mars in 9th house--religious battles hardly describes the ongoing, centuries-long East vs West contest that now threatens all of civilization.

Another factor of interest is that the Solar Eclipse @7Tau05 conjoins a midpoint so we have this picture: Mercury-NN = Sun = Moon. The Mercury-NN (North Node, a point of encounter and destiny) involves mixed potentials for: new corridors of transportation, inefficient transportation methods, coordinated joint efforts, theft of material or information, and/or smuggling or other unlawful activities that use transportation systems.

Mercury-NN also relates to the Media, discussions and conferences, and joint plans. With Sun and Moon there we see potentials for the enhancement of communications, a focus on the importance of messages, details meant for the general public, locating people to gather information (GPS; NSA surveillance, etc), reactions about how others use information or data, using associates to research and/or disseminate info, intellectual associations, a desire to tell other people our troubles and to share thoughts and ideas (Munkasey; Ebertin). Naturally, tech advances and social networking come to mind.

Also notable is the inconjunct (quincunx) between the two societal planets, Jupiter and Saturn from 6th house of Work, Health, and Service (Military, Police, Civil, etc). Of course, Saturn is in Virgo, the sign of Work of a Dedicated Variety and here it's working behind the scenes or in isolation. Jupiter plays many roles suitable for the planet of increase and expansion and wears the hat of The General when wars are waged. Their inconjunct signifies adjustments that need to be made between the principles of expansion and Saturnian restriction along with feelings of being burdened by responsibilities, neglecting duties, and guilt for past indiscretions and bitterness over binding restrictions. A need for moderation in all things such as diet and a healthy focus on exercise is highlighted by the Jupiter-Saturn inconjunct.

And since US natal Saturn (14Lib48) is rising in this chart (which emphasizes America's natal Sun-Saturn square on the Angles) we find that the tradition of political checks and balances that our nation has always touted to the world is on the modern menu and is being neglected and undermined on several levels--and tossed into the dustbin of history, if certain anti-government, anti-democratic politicians and their billionaire backers have their way.

And then there's starry Sirius at the top of the chart (MC 13Can46; The Goal) conjoined by US natal Sun (July 4, 1776; the president) and asteroid Panacea (illusions of cures). Has our cult-of-personality presidency been meant to calm and distract the public concerning America's true and ultimate goal of establishing a Global Government based on Zionism?

Well, in relation to Politics, Sirius (the mundane becoming sacred) one one level is a symbol of Venusian goddess worship (as America's Founding Fathers well knew and practiced in various ways--see the stars and architecture of Washington DC for clues--the District is simply lousy with horoscopes, Zodiacs, the sign Virgo, and symbols of Venus, Isis, Ceres) and with the mystical pair of Neptune and Pluto in the 8th house of The Occult (aka The Hidden, or Metaphysical Studies and Practices) we may expect a myriad of mysteries to continue along with research into them (#rabbitholes of distraction!)

The North Node (future direction) in Venus-ruled Taurus (the 'Bull of Wall Street') is in 8th house (Corporatism; Big Money; Insurance; Inheritance, Legacies) as well, with the separative SN in the 2nd house of the National Treasury (a great loss of US funds and resources

Well, to me it all sounds much like a description of our 'modern world' doesn't it? And yet, there's nothing new under the sun...

For more info concerning the Horoscope for Modern Humanity, you may wish to see Alan Meece's book, Horoscope for the New Millennium.