Horoscope: US Moon Return on Election Day 2016--We the People!

Have you seen the horoscope of our national Lunar (Moon) Return for November 8, 2016 which happens to be General Election Day 2016? Here's the chart, below. Please enlarge the image to read my messy-as-usual notes for it seems America will be hatching 'an exotic moth' that day since we already acccommodate the 'hovering hawk' of NSA total surveillance: 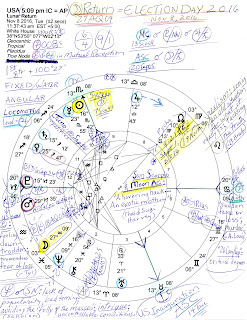 Venus @25Sag47 in 11th house is out of bounds (OOBs) of the earthly plane and acting according to her own unusual or possibly skewed perspectives yet is in Mutual Reception (on friendly terms) with Jupiter (Sag/Libra) which leads a planetary Locomotive of success (which could signify Mr. Trump with his Jupiter in Libra.) Meanwhile critical degrees grace the ASC/DESC axis of Self and Other and manipulative gold-hoarder and power-grabber Pluto has just risen into the 12th house of Karma, Secret Deals, and Politics while testy Mars at a critical-crisis 29th degree readies to rise and take control of the situation. Following activist Mars closely is asteroid Hidalgo who seeks higher status, an exotic social climber, we might say. But is Hidalgo the 'exotic moth' a majority of We the People will vote for?

Actually, Mars rising is Donald Trump's planetary signature but he expresses it with a dramatic Leonine flair! Plus, there's the 8th house 19 North Solar Eclipse @9Virgo to contend with and its realism vibes which will take precedence since late August-early September as expressed in large part by candidate Bernie Sanders. However, you see the Scorpio Sun and Mercury at the top (Mc) of the chart which suggests Scorpio Hillary Clinton (natal ASC, Mercury, Venus, Chiron, Sun) at the Aspiration/Goal Point of the Lunar Return chart and in her natal 12th house of Politics. Is the American public feeling futuristic (AQ) enough to toss out establishment candidates? Polls have said so but November 8th is what tells the conservative vs progressive tale one more time.

For more info, let's look a bit closer at the degree of a planet that often triggers action:

Warrior Mars at '30Cap': "A Secret Meeting of Men Responsible for Executive Decisions in World Affairs," a symbol which relates to an "occult hierarchy," or, the "White Lodge" (the White House.) Also "seeing through the facts" is involved with this degree referencing EXECUTIVE POWER (Rudhyar) which resonates well with US Politics, this year's major political election, and the oppressive, exploitative corporate structure behind the US government. Plus, the Illumination Point of '30Cap' uncovers what I believe also relates to Election 2016 rhetoric and proposals and to a basic American tradition:

'30Cancer': "A Daughter of the American Revolution"...GLORIFICATION OF THE PAST." Have we learned anything from war at all?