The Unaspected and Out-of-Bounds Planets of Hillary Clinton

Well, my joy at finally having an accurate birth time for Hillary Clinton is now squashed since The Mountain Astrologer has published a joy-squashing article disagreeing with Marc Penfield's 2:18 am chart with a Virgo Ascendant for Hillary. However, for the purposes of this post, any birth time will do as long as the date is correct so let's continue with our consideration of the two 2016 candidates--yesterday Donald Trump (follow the link, below) and today Hillary Clinton who was born with an unaspected Jupiter in its own sign of sagittarius and quirky Uranus out-of-bounds (OOBs) in late Gemini.

For a general view of out-of-bounds and unaspected planets please see Part 1: The Unaspected and Out-of-Bounds Planets of Donald Trump.

Here's a view of both Clinton's and Trump's natal charts as shown in yesterday's post: 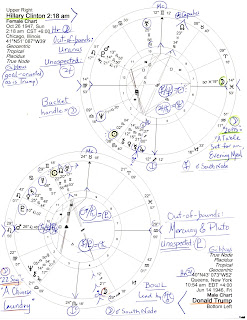 There are two natal planets to consider for Mrs. Clinton--an unaspected Jupiter @00Sag27 in the 3rd house of Communications (ex: unavailable emails!), and an out-of-bounds Uranus @25Gem56 Rx in the 10th house of Career and Public Status. Or course, Jupiter-Uranus are the 'lucky break' duo but here we'll consider them separately.

When Jupiter, planet of expansion and corporatism is unaspected its functions that would moderate other facets (planets) of her psyche are lacking or perhaps we can say, unconscious. As you know, an unaspected planet is strong yet has a detached, mentally remote quality and Jupiter's usual breadth of outreach and sociability are limited here unless other chart factors supply spontaneity and judgment to the personality. There may be noticed a tendency toward erratic bursts of enthusiasm which quickly fade--perhaps you've seen it.

And without Jupiter to influence and uplift her other planets via major aspects, she may feel weighed down by the gravity of life and retreats to an 'ivory tower' (supported by her me-time Pisces Moon in the 7th house of Partnerships with its 7th house cusp in Jupiter-ruled Pisces; as Dane Rudhyar observed: "Marriage, and other kinds of partnerships as well, can be a field of unresolvable tensions." Obviously, with a Pisces Moon, compassion is a reigning need and the loner position may be an emotional necessity from time to time in order to recharge her energy level and organize her thoughts).

Now since astrological Jupiter has to do with morality, ideology, philosophy, and how one responds to others (here, like a Sagittarian), an unaspected Jupiter denotes one who feels disconnected from current religious and ethical standards of behavior, and is detached from cultural norms.Self-containment and an unique vision may be evident with improvements to be found in the house where Jupiter is posited (3rd). This condition of Jupiter may account for some of her opponents' "above the law" accusations against Mrs. Clinton. However, other charges of "neocon warhawk" and similar charges against her resonate with the Sabian Symbol for Jupiter's degree of 1Sag: "A Grand Army of the Republic Campfire."

Naturally, things become quirkier with the planet of genius, reform, and disruption, Uranus, in the sign of communications and sales, in the 10th house where everyone in the world can see its behavior which in Hillary's case is Geminian. Already on the wacky side, Uranus when out-of-bounds of the earthly plane and out of touch with other natal planets denotes an out of control quality to her public status and she certainly has risen above the crowd. And this may support her 'loner' tendency noted with Jupiter unaspected. Apparently she's lacking the electric stimulation that Uranus when affecting another planet can provide (in those with enough self-awareness to handle transpersonal energies). Plus, you've probably heard the criticism of Mrs. Clinton for not being 'exciting' enough during Campaign 2016, right?

Another tendency resonating with her Jupiter via OOBs Uranus is the above-the-law accusation her opponents are always quick to level. That is, she may think she's above the law (to the point of criminality) yet it seems that most if not all politicians think the same and this is one reason they enter politics in the first place (money being the other).

So we find that spontaneity, humor, and zaniness are expressed occasionally by Hillary Clinton in short bursts of hilarity that quickly fade and she is not known for telling jokes well. But maybe voters will turn out on November 8th and show appreciation for the serious, studious, sober, policy-wonk Mercury-Saturn square of politician Hillary Rodham Clinton rather than voting for the reality-challenged Mercury-Neptune square of Mr. Trump. It amazes me how many of us forget that campaign rhetoric seldom brings policies to fruition yet we fall for politicians' empty promises election after election.

And what about Hillary's VP pick Tim Kaine? Oh, he has an out-of-bounds Mars which the American people will have to deal with if he ever becomes president! Perhaps we observed his OOBs Mars last evening during the VP debate with Mike Pence as aggressive Mars interrupted Pence wa-a-a-y too many times, thus making a garbled mess of the proceedings.

For more on unaspected planets, you may wish to see Bil Tierney's Dynamics of Aspect Analysis.