In this image the natal planets of VP-elect Mike Pence (R-IN) are penned around the outside of President-elect Donald Trump's natal chart which shows a few descriptive links between the men, one born in June 1946, the other in June 1959. Mr. Trump's chart and planets are highlighted in orange, Mr. Pence's planets are in blue-green with no angles shown since I don't have Mr. Pence's birth time; therefore, 'noon' positions are entered on the chart: 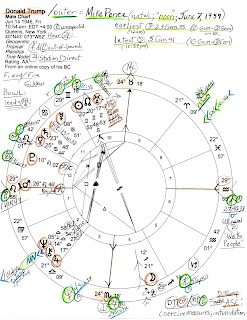 Naturally, Mr. Pence's natal planets were transits in 1959 for the almost-13-year-old Donald Trump.

The links that pop out at me (and are not dependent upon an accurate birth hour for Mr. Pence) are:

DT's late Leo Mars and Ascendant are conjoined by MP's natal Pluto @1Virgo. All three conjoin royal star and 'kingmaker' Regulus (success if revenge is avoided); this creates midpoint pictures with potentials, one of which is penned, lower right: DT Mars/MP Pluto = DT ASC: daring (Ebertin); coercive measures; intimidation (Munkasey); also: DT Mars-ASC = MP Pluto: violence; a love of quarreling; desire to rule others; premature action; forcible adjustment to new circumstances and conditions (Ebertin). As always, any, all, or none may apply.

Together they concentrate Mars-Pluto force with its potentials for chaos, aggression, suppression, and/or oppression.

MP Sun @16Gemini conjunct DT Uranus @17Gemini: quirky, rebellious Uranus which not only leads all of Mr. Trump's natal planets but is oriental (rising just before his Sun) has MP's natal Sun shining upon it which suggests that pride may interfere with group endeavors and cause separation or disruption, and loyalty issues may ensue. This connection shows DT inviting MP to take a leadership role and hints that MP was selected for his traits and abilities that DT lacks (obviously!). Yes, they are a team yet trouble may develop unless MP accepts DT's non-traditional ways of doing things, and/or if their egocentric personalities cause too many quarrels over authority issues--especially with DT's planet of authority and responsibility (Saturn) in Cancer opposed by MP's natal Saturn strong in its own sign of Capricorn. Plus, MP's Saturn widely opposes DT's Mercury which suggests MP's need for DT to become more sober in his communications--if not, then restriction, criticism, or resentment may occur.

Perhaps Mr. Pence's Solar Return in June 2017 will reveal their Sun-Uranus link either positively or negatively, and it will be a Sun-to-natal-Uranus transit for Mr. Trump.

MP Mercury @21Gemini conjoins DT Sun and North Node of public contact and future direction. This connection suggests the ideas and goals of DT which are in sync with MP's thoughts and expression of them to the public via the media or via speeches, meetings, and/or pressers. It also indicates the more aggressive and dramatic forum that MP has now thanks to DT; Mr. Pence may add his input to DT's ideas and plans but this must be done gingerly by MP or the super-sensitive DT may take offence (or perhaps MP will manage to turn DT's ideas and plans into something totally different than what DT intended. This is perhaps not a good idea.

An interesting link is formed on MP's Nodal Axis in DT's 2nd house of Money and Values which holds Trump's Jupiter-Neptune 'speculator' pair (and which rule DT's natal 8th house of Corporatism and Debt via its shady Pisces cusp). DT's Juno (a political asteroid) is there are well along with guru Chiron, the blind spot. This picture is fraught with complexity beyond the scope of this meager post but with MP's North Node conjoining DT's 2nd house trio, Mr. Pence may find himself dealing with such monetary themes in his public contacts before their first term ends. The presence of wounded/wounding Chiron between DT's Jupiter and Neptune seems to be a sign of Mr. Trump's many bankruptcies and over-extensions of credit to the point of massive debt to foreign banks. DT's chronic non-payment of workers he hires may be pictured here as well along with his over-inflated boasts of his wealth.

Now there are other chart factors between them that are worth considering such as MP's Jupiter Rx conjunct DT's IC--opulent surroundings, gain via real estate?) but these are the primary ones I see. You may see others, of course, and a study of their progressions and return charts will yield more information about their association (and make for a much longer post).

There is one more thing I want to mention: Mr. Pence's natal Chiron Rx @27AQ38. As you know, Chiron is the Wounded Healer, priest, guru, mentor, and blind spot--and signifies the Christ archetype in a horoscope. Here we find that MP's natal Chiron conjoins US natal Moon (We The People) of July 4, 1776. This conjunction suggests the religious aspect of Mr. Pence but perhaps also a kind of wounding which may occur due to Theocracy being brought into the US government where it doesn't belong. I say this as a Christian myself and as a Child of the Revolution--one who demands that church and state remain as separate as possible in America for the sake of religious freedom. For it is my belief that morality cannot be legislated but must come from within each individual. Externally enforced morality is a false morality and only serves to enslave not free!

Disagree if you must but there it is. And if I've missed a link between their natal planets that you consider important or you have info to add to the above assessment please let me know in a comment or at judecowell at gmail dot com.

Related posts: The Asteroids and Dreams of Mike Pence; The Oriental Planet of Donald Trump; Horoscope: Inauguration 2017; and Horoscope: The Great American Eclipse of August 2017--the 'splitting' energies of which will imprint upon the presidency of Donald J. Trump. Or should I say, the Trump-Pence presidency?