4 Virgo and the Midpoint Pictures of Trump and Hitler

Is it some sort of hellish alt-right synchronicity that the current and the soon-coming Secondary Progressed (SP) New Moons of Donald Trump and Adolf Hitler fall so near one another at 3:28 and 3 degrees of the Mercury-ruled sign of Virgo?

SP New Moons issue from, or are based on, natal horoscopes; view the horoscopes of Adolf Hitler (RR: AA) and/or Donald Trump (RR: AA).

So as you probably already know, the Sabian Symbol for '4 Virgo' is particularly revealing of these two egomaniac snake oil salesmen who use racism, Goebbels' Big Lie tactic, and other emotionally based rhetoric to manipulate and divide the masses. (edit: with topics such as this):

'4 Virgo' = "Black and White Children Play Together Happily...keynote: The overcoming of sociocultural prejudices."

"At this fourth stage the basic technique which applies to all truly spiritual progress is clearly stated. Every human being should be seen, approached and warmly met as a 'child of God,' or in less religious terms as an exemplar of Man. Such a status gives to every social and interpersonal group the character of a BROTHERHOOD." (An Astrological Mandala, Dane Rudhyar.)

Unfortunately for the entire globe, the "Brotherhood" envisioned in the 4 Virgo Sabian Symbol is not at all the vicious type of 'Brotherhood' these dividers-not-uniters prefer, is it? (The prison gang/crime syndicate the aryan brotherhood is closer to the black vs white truth kept continually stirred up into a simmer, then a boil by vested financial interests--profiteering warmongers who start wars for other men and women to fight; many of them are bald and "dominate gatherings.")

So both Trump's and Hitler's mdpt pictures show emotional issues if not outright neuroses and both have separation ingrained in the chart (aka, 'closeness vs freedom' complexes). Both these self-defensive actors have potentials for attacks from others and both have a Midpoint Rising in their natal charts: Saturn-Neptune = ASC for Donald, and Jupiter-Saturn = ASC for Adolf.

(Mdpt pics from The Combination of Stellar Influences, Reinhold Ebertin.)

Below is an image that I hope you may enlarge for reading. These are the natal midpoint pictures of both Trump (in red, on the left) and Hitler (in green, on the right). Potentials for expression are messily penned on; any, all, or none may apply and are forever subject to eclipses, planetary transits, and progressions...even Adolf's: 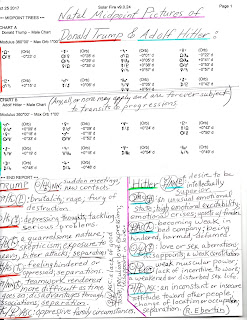 Trump and Hitler: Apex Planets of Their Natal Midpoint Pictures