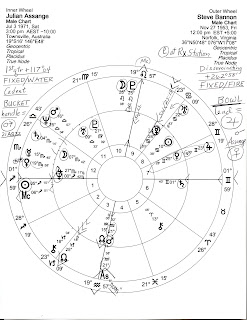 Since I wasn't planning to write anything today I'll simply post natal charts as a bi-wheel of Wikileaks' Julian Assange (birth time known, "From him") and alt-righter Steve Bannon of Trump and Breitbart fame to note the connections and links between their natal planets because, as you've heard...

Julian Assange confirms Wikileaks was approached by data firm working with Trump campaign last November but says their "approach" was rejected and Hillary Clinton's 33,000 emails were not released by Mr. Assange as previously threatened/promised. Notice that Mr. Bannon's name is left out of the headline of this report published by the Chicago Tribune yet he's been reported as being the VP of 'data firm' Cambridge Analytica at the time.

Of course, Mr. Bannon's Moon position ('noon') and Angles are not for certain with no birth time known so use with caution if at all. However, we do know that: born November 27, 1953 in Norfolk, Virginia, Bannon's natal Moon ranged from 22Leo03 (the worst foot forward degree, or, 'own worst enemy') to 4Vir10, the degree and minute of America's Secondary Progressed Full Moon in December 2008. As you see, this SP Full Moon timed the outer limit that the US could reach into the world (Crash 2008) and we all should have learned that lesson of cautious Saturnian limitation then. Because going beyond natural limits leads to reap-what's-been-sown karma, as universal natural law dictates.

Actually, I believe a majority of We The People did learn the lesson--that we as a nation were overextended on many levels but like kittens in string, we were shocked by the level of corruption in government, banking, and other areas of civilization that were starkly revealed by the end of 2008 and cast a degrading and harsh light upon American society as a Collective. But the Jupiter-Neptune duo isn't concerned with observing natural limits, in fact, just the opposite--and including political conflicts, according to Reinhold Ebertin.

Please enlarge the image for a few basic notes are penned on the charts; Assange is a Jupiter-Neptune-conjunction escapist and wizard while Bannon is more of a Jupiter-Neptune-trine occultist conman and magician. Either way they tend toward speculation, illusion, and promotion of bubbles and schemes just as Mr. Trump likes to do via his own Jupiter-Neptune conjunction which, quest-like, has wounding-wounded Chiron smack dab in the center, and the trio posited in his natal 2nd house of Money and Values.

And perhaps it will be enlightening if not curiously revealing when the 'We The People' Solar Eclipse manifests on February 15, 2018 and conjoins US natal Moon which was target planet of the Great Conjunctions of Jupiter and Neptune. The planetary pair perfected three times all through 2009--conjunct US natal Moon, thereby forcing a seductive, dreamy, bubbly unreality into the weaker crevices of our society and providing cover for much of the Obama administration's activities, 'rock star' as they may have seemed.

A related post: Steve Bannon: In the Realms of Jupiter.

Also note that we are under the influence of the 1 North Solar Eclipse of August 21, 2017, The Great American Eclipse, with its theme of: "information is distorted and possibly false" (Brady) which also implicates today's well publicized released of the JFK Files. In Astrology, eclipses are known as 'wild cards of the Universe' and 'cosmic blinks' and do tend to uncover hidden things.

Please note that I have no idea why the lines of this post are not following the usual tidy alignment. Blogger? Hello?