Horoscope December 22, 2017 11:59:59 pm est: Who knows what evil lurks in the hearts of Capitol Hill legislators at midnight when the time for legislating runs out? Government shutdown? ALEC bill-writers toss Americans into the streets and off their health insurance policies? Needy children starve? Arctic wildlife is decimated by Republican oil drilling? Corporations celebrate their free money at our expense? These are merely some of the possibilities that may be brought to fruition on Capitol Hill as this sessions ends.

Please enlarge the horoscope for a few chart factors are penned on; some details are noted, below: 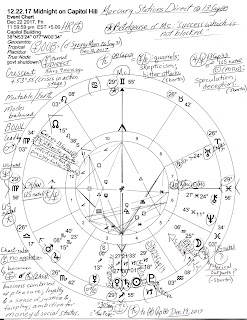 As you see, brash Mars @8Sco40 ('9Sco' = "Drilling for Oil") leads the throng of planets in BOWL formation with lawmaker Saturn @00Cap21 conjunct IC ('The Drain'), a symbol of mining in 4th house. The Old Man is just growing accustomed to being back in his own sign of Capricorn (the sign of government, law, and business) during this Hour of Saturn with its freshly Stationed Direct Mercury @13Sag00, and valuable if vengeful Venus @27Sag27 out-of-bounds of the Earthly plane and isolated from the other planets (actors) yet by degree, Venus conjoins the December 18, 2017 New Moon (26Sag31), the 'Syzygy Moon' of the chart.

Leaving the 12th house of Karma, Politics, and Backroom Deals is the current Solar Eclipse @28Leo32 (the chart's 'PE'), aka, The Great American Eclipse of August 21, 2017 containing 1 North vibes of "information distorted and possibly false" and "great pressure is put upon relationships" (Brady).

And of course, wealthy saboteur Pluto @18Cap29 (conjunct Minerva, journal of the Hegel Society) continues stimulating the 1993 Great Conjunction/s of Uranus and Neptune so we know that, "The big picture must be followed, very little option to do otherwise" (Tyl); this, in part, is a picture of the bribes, payoffs, and blackmail used on Capitol Hill by wealthy donors, bankers, and foreign financiers in order to sway US legislation and subsequent vote-counting their way. Herr Hegel would be proud!

Wonder how US finances would be now if it weren't for decades of embezzlement, financial sleight of hand, misuse of taxpayer funds, backroom deals on covert ops, secret slush funds, overblown military expenditures, and outright theft of taxpayer monies?

Well, as we know, the crooks are in charge and they're attempting now to avoid the financial reckoning they so richly deserve for their decades-long mismanagement of America's resources which rightly belong to...