A New Atlantis, Williamsburg, and Our Secret Destiny

Facing Year 2018, America as Bacon's Utopian Dream of a 'New Atlantis' Careens On

First, here is a C-rated natal horoscope for (Sir) Francis Bacon if you're curious. And here's an informative web page that displays and compares Bacon's natal chart with that of his mother, Queen Elizabeth I. Yes, she was apparently his mother so Bacon was a 'Tudor'.

Now Francis Tudor Bacon's birth name was Aron Verulam, Viscount of St. Albans, in case you were wondering. The little prince was born in London, England on January 22, 1561 (OS)/February 1, 1562 (NS) at 7:42 am LMT (original source unknown, hence its C-rating though legendary astrologer William Lilly may have something to do with it).

Now, as we face year 2018, why bring up Sir Francis and his royal lineage here on Stars Over Washington? Not because the Mars rising with royal Regulus (the 'kingmaker' star) fellow named Trump now playing the role of president is a 'monarch' in his own mind (he is), but because I've always included posts here concerning America as the New Atlantis and have added other of the more esoteric topics and mysteries which include what some call The Secret Destiny of America. And that 'secret destiny' is very much linked to Sir Francis Bacon his cousin Bartholemew Gosnold, and others of their ilk who did what they could during their life times to bring Utopian ideals into reality upon this particular continent. That they had plenty of financial, political, religious, astrological, and occult help through the ensuing centuries implementing The Great Plan seems plain to me, but if not so to you, then yours truly has done a lousy job disseminating such intriguing information these 12+ years (and mixed in with my continual 'common good' dissent against rubbish government officials in breach of the public trust; turns out, it's a huge job).

Actually, this post is inspired by my re-reading of Final Warning: A History of the New World Order by David Allen Rivera who has investigated the mystery of the Bruton Parish Vault where Nathaniel Bacon, nephew of Sir Francis, is said to have secreted an unabridged version of Francis Bacon's New Atlantis (America as Utopia)--perhaps along with several other documents, artifacts, maps, and more. Noted author and researcher Graham Hancock has quite a bit to say about this mystery as well and you may wish to see his The Treasure of Destiny page which tells of Marie Hall's famous search for the Vault--she, the wife of esteemed astrologer and author Manley Palmer Hall.

Now for years I've been interested in the Bruton Parish Church and its Vault mystery. President Thomas Jefferson is thought to have been the last person to see its contents in 1803! (Then was it reburied elsewhere? perhaps under the Washington DC Ellipse during the Civil War?) So when my genealogical research pointed toward Jamestown's earliest days and then on to Colonial Williamsburg, I was intrigued to discover that Colonel John Page (1628--1692) had donated the land on which Bruton Parish Church was built (plus, he donated a generous offering to fund it) for there is a Page in my 'family woodpile', you might say.

So were John and/or other Page family members 'in on' the secreting of the historical treasure? Will America's 'Secret Destiny' ever be revealed by its contents or by other means? What did Williamsburg renovator John D. Rockefeller know and when did he know it? And is our national destiny encoded on the reverse side of America's Great Seal (image shown) where, "The mystery and vagueness of these 'disembodied' symbols conceal their meaning?" (Founding Fathers, Secret Societies, Robert Hieronimus, PhD.) 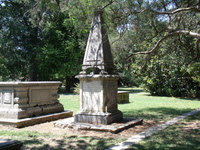 The pyramid shaped grave monument in the Bruton Churchyard is that of Colonel John's son David Bray and wife Elizabeth Page Bray and is said by some to hide a passageway to the hidden Vault. No, they are not in my direct ancestral line for David died young and the couple had no issue, as they say. But if one wanted a mystery to ponder which included elements of history, archaeology, early America, genealogy, secret societies, and esotericism, the Bruton Parish Vault could be a good place to start, don't you think?

Yet for those who prefer modern times, a visit to the Church or the website of the Bruton Parish Episcopal Church may be more to their liking.

The History of the Freemasons and the Skull and Bones (video) posted in May 2016 on Friday the 13th; A Brief View of the Stars Over Washington DC; Is This the Most Important Date in US History?, a video (Astrology added) in which an event in 1588 is discussed and subsequently 'bolstered increased interest in the colonization of the North American continent' along the lines and blueprint of Sir Francis Bacon's Platonic Utopian dream. And here, facing year 2018, we remain plopped and wondering.

Yet is it curious that the February 10, 2017 Lunar Eclipse @22Leo shone upon a certain planetary conjunction in the 1588 event chart? Follow the link to view the horoscopes of the February 2017 Lunar and Solar Eclipses with both charts set for Washington DC. Or, perhaps you'd rather look ahead toward the Eclipses and a Few Other Cosmic Events of 2018.

I meant Colonel John's son-in-law David Bray. Will check my notes again to be sure! jc