Astro-Notes: Is Stephen Miller the rat in the shutdown woodpile? 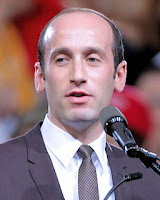 The natal horoscope of 'political scientist' and Trump Senior Advisor Stephen Miller has a Rodden Rating of AA (BC/BR in hand) if you're curious about the guy some are blaming for influencing Donald Trump's intransigence on immigration issues during current congressional negotiations. Senator Lindsey Graham is one such casting shade upon Stephen Miller for his outside-the-mainstream opinions on DACA and other immigration issues--and for his influence on the rule-by-whim Mr. Trump. Here's today's Bloomberg update on the shutdown.

His Earth-Fire personality blend is known as a 'bull-dozer' who may push his moral certitude upon others. Dictatorial and insensitive to other people, Mr. Miller values rationality over human suffering while shoving through his preferred political policies (Sun Sign-Moon, Charles and Suzi Harvey).

A bright note is a first-house Jupiter Rx in Aquarius (9:36) denoting social concerns, a broad intellect, and a knowledge of human nature. Yet the placement also adds self-will and a potential for indecisiveness (Ebertin).

A Caution from Royal Regulus

Also in Mr. Miller's natal chart, we find Moon in Sagittarius (11:14), sign of immigration and foreigners so one may be tempted to think his interest and hard line views are emotionally based. Sun @00Vir46 conjoins royal star Regulus--and the natal Ascendant of Donald Trump--both of which were 'eclipsed' on August 21, 2017 by The Great American Eclipse. As you know, Regulus is the 'kingmaker' star and when conjoining a natal planet can denote an individual with a 'king complex'. Now you and I both know that Mr. Trump is the epitome of this narcissistic, me-first psychological complex and apparently Mr. Miller is a victim of it as well. His Mercury in proud, royal Leo adds to his thinking on the topic of 'rulership' and the right to attain and wield it. So these days, it seems the divine right of kings is alive in the White House! However, Regulus always contains an important cosmic caution: success if revenge is avoided. Otherwise, gains will be taken away.

Yet the planet of dreams, visions, and ideals--Neptune--conjoins one of the Cardinal World Points of fame, fortune, and recognition on the world stage (00Cap56 Rx) in the 12th house of...Politics and Karma. As you know, Saturn-ruled Capricorn is the sign of government, law, and business. In support, his Mercury-Mars conjunction in brash Leo suggests strong political opinions and a tendency to quarrel over them, perhaps in a self-interested fashion (Leo).

Now with Saturn-ruled Capricorn rising, Stephen Miller may have had a hard road during his early years and even now seems older than his mere 32 years would suggest. A Saturnine expression seems always on his face--perhaps because a Capricorn Ascendant suggests discipline, austerity, plans formulated secretly, and a reserved demeanor (frowny!) Everything Mr. Miller does must have a definite purpose and serve a pragmatic end. In short, if you're looking for fun, a barrel of monkeys Stephen Miller is not. And note that the Virgo-Pisces victim-savior axis is intercepted in his natal chart suggesting a cosmic imperative to deal with such issues during his life time. this relates to a Mercury-Jupiter opposition which squares his Nodal axis (public contacts) and indicates one who is indiscreet (similar to Mr. Trump with his Mercury-Neptune square), holds illogical beliefs, feels intellectually superior, tends to over-promise (like Trump), and becomes flustered when under scrutiny for his memory fails him under stress. We saw this recently in one of his TV appearances with Jake Tapper. Here's Seth Myers speaking with Mr. Tapper, who's known Stephen Miller for years, discussing Miller and the cut-short interview.

Chart-ruler Saturn in 10th house (@22Sco08) makes no applying aspects in the chart though there is an applying Mars-Saturn square (see the aspect, below). Natal Saturn in Scorpio adds to his Saturnine demeanor a serious attitude, obstinacy, and a tendency to probe deeply into metaphysical subjects and to apply such principles in a practical manner.

Perhaps the most prominent chart factor in his chart is, of course, Pluto @2Sco26 conjunct MC, the Goal-Aspiration Point. This supports his Sun-Pluto sextile 'control' implications and also his metaphysical and occult interests (like Hitler!) Actually, the shape of his natal planets show Venus @25Can05 as leader of a Locomotive pattern of high-powered success, a pattern which may ride roughshod over others in order to achieve its goals. His 7th house Venus has only a separating trine with authoritarian Saturn (in 10th house = a fall from grace? plus, Saturn-Pluto = SN in 10th house) so a sense of loyalty may be evident along with a reserved, even cold, demeanor. At 25Cancer, Miller's Venus precisely conjoins Mr. Trump's Venus in Cancer with Trump's Saturn nearby. Is theirs a long-lasting love match?

And ruling Mr. Miller's 3rd house of Communications via Aries and his 10th house of Career and Public Status via Scorpio is Mars which forms a square with Saturn (3A00). This aspect can indicate a career in Politics although it also indicates difficulty relating to others. Sullen anger, resentment, callousness, and an austere disposition may be noticed, plus, a Mars-SAturn square can attract potentials for accidents or even violence. Another suggestion here is restrictions in career matters (which some Americans think is a good thing).

Another chart factor spread across Miller's chart is high intuition of which he apparently has gracious plenty. Besides, his visionary, impractical Sun-Neptune trine (0A10), one such indicator is his Prenatal Solar Eclipse Saros Series, the 5 North which, prior to his birth, manifested on May 19, 1985 @28Tau50 (among the Pleiades constellation and its difficult stars of rage and fury). 5 North themes include hunches, prophetic dreams, and deep insights (Brady), and it last manifested in 1985, as noted. The next occurrence of a 5 North Solar Eclipse will be on June 10, 2021 @20Gemini.

Taken all together, I'd have to say that Stephen Miller is a cantankerous blend most noticeably under the sway of three prominent chart factors: his Moon-Uranus conjunction, a problematic Mars-Saturn square, a Sun-Pluto sextile, and powerful Pluto in occult Scorpio at Midheaven. Disagree if you wish, but there it is.

Well, there are many more chart factors for Stephen Miller that are worth consideration and for brevity's sake, I hope you'll study the natal horoscope of Mr. Trump's Senior Advisor if you haven't already!

This may give another insight to this man https://www.alternet.org/2019/04/here-are-21-facts-explain-stephen-miller/

Thanks for adding this patricia neild good to 'see' you here! jc