Historical Horoscope: The Battle of Agincourt

The decisive English victory by Henry V against the French king at the Battle of Agincourt (Azincourt) on October 25, 1415 has held an understandable fascination for many people through the centuries. This fascination I also felt but little did I know until recently that a Strickland fellow was on the scene and fighting for the winning team, one Thomas de Strickland. Earlier alternate spellings of this venerable name include de Stirkeland.

So considering my liking for setting up Historical Horoscopes, I thought it might be cool to set up a chart for the Battle of Agincourt, Pas-de-Calais, Northern France. As for the timing of the battle's start, one source says that 'three hours after sunrise, still no fighting' and of course it had rained the night before so mud was in abundance (and helped the outnumbered Englishmen to win, plus, they skillfully utilized their longbows; Henry's strategy won the day, as you know). According to several accounts, Henry gave the order to advance at or about 11:00 am so the horoscope is set for that time. As you see, 7th house Saturn is at Station Rx in tribal Cancer as the Order of Chivalry, so popular in France, is disrupted forever by Henry and his men, and a new age begins. Jupiter (the general) in authoritative Capricorn rises in 1st house, is chart ruler (battle ruler), and represents Henry, the victor. Note, lower left, that Jupiter makes only one applying Ptolemaic aspect, an opposition to watery Neptune Rx, muddy details penned on.

Now this chart shows the modern planets added, of course (I can't resist!) and if we count rebellious Uranus there's a YOD pattern of crisis/special task/turning point with its apex karmic Saturn in Cancer which denotes 'aggravating circumstances via family ties' which I believe there were due to a certain brother arriving late to the melee. That Saturn is the apex planet of this configuration marks it as a doubly fated YOD and shows that perhaps the French may not have been as prepared for battle with Henry as they could have been--or simply that they were overly limited by their strong adherence to the Age of Chivalry while Henry and his army ignored such 'niceties'. Yes, Agincourt was the end of 100 years of war and there's warrior Mars at the apex of a dynamic T-Square between Pluto and North Node, an indicator of 'violence, brutality, and the misfortune to be placed in someone else's hand or power' (Ebertin).

If you wish, please enlarge the horoscope to read my scribbled notes concerning this Hour of Mars, the warrior: 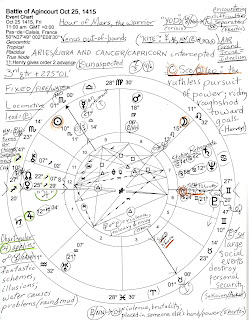 Shown just below the Descendant (27Gem20) are Pluto and the Prenatal Solar Eclipse of the Battle, a Total Eclipse @23Gem53 in the 12 South Saros Series. However, this must be a 12 Old South series since 12 South didn't begin until September 19, 1541. Therefore, I can only add details on a Solar Eclipse in Mercury-ruled Gemini which, for karmic progress to be made, must include versatile, fluid expressions and logic without the negative qualities of Gemini such as duplicity, superficiality, and caprice. In Gemini, this also involves the gathering of information, and near the 9th house Mercury I have penned, "an informant?" for the Midheaven (Goal Point) contains the Sun-Mercury midpoint and the Sun is on the level of leadership, ruthless Henry, while messenger Mercury is on the 'French side' of the chart.

Plus, the addition of powerful Pluto (21Gem24 Rx) so near the Solar Eclipse denotes potentials for 'criminal offenses' so common in war and/or 'a charismatic leader of the masses' (Lineman). Pluto in Gemini reveals 'ruthless behavior with regard to society or the social order' (Ebertin) which the Battle of Agincourt certainly was as evidenced by the world-changing results of this brutal event.

Now for the curious who have time to spare, here' a Timeline documentary on The Battle of Agincourt.