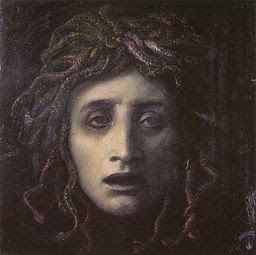 If you could chose any star to avoid in connection to your natal chart and planets it would probably be the most malevolent of them all, Algol (aka, Caput Algol). Here are potentials for Algol, some of which may remind you of a certain public figure we both know all too well these days:

"Mass tragedies: war, mass murder, fanaticism, ruthlessness, bigotry, propaganda, horror, violence, mass vandalism, mob violence, being torn to pieces, extremes of brutality. Death by hanging, strangulation, electrocution, wounds to the throat and neck." (Algol has been in Taurus for more than 1800 years, and Taurus rules the neck and throat...perhaps when it gets to Gemini this will change to wounds to the arms and shoulders ??) "Often found in criminal or murder charts. In mundane charts it may presage great disasters such as mine cave-ins, fires, quakes, riots etc. Extreme sickness." Quoted from Diana K. Rosenberg's page Medusa's Head.

Of course, "wounds to the throat and neck' suggest decapitation which can also include a 'heady' experience that causes a person to overdo his reactions, to 'lose his head'--like, for example, taking over the Oval Office reins and assuming you're above the law. And many would describe demagogue Trump in the White House as "a great disaster" for America and the world. Watch for May 15, 2018's New Moon @24Tau36 (7:48 am edt) for it blinks at Algol, stimulates the natal MC of Mr. Trump, and denotes a new cycle of activity which tragically may include some of the malevolent potentials listed above. The lunation also occurs within a degree of the natal Taurean Sun of the State of Israel.

So as you know, the Midheaven (MC) in any horoscope is the most visible point and describes The Goal or Aspiration Point of the person, entity, or event described by the horoscope. This 10th house cusp is sometimes known as the WHY? Point (ASC = WHAT?; DESC = WHERE or WHERE TO?; IC = HOW?) so there in Trump's Goal department nestles nasty star Algol. Does any of this remind you of the horrendous photo that comedian Kathy Griffin published in which she pretended to hold up a decapitated head of Donald Trump in Medusa-Head style? Me too. Wonder if Ms. Griffin studies Astrology?