US in Crisis Mode under Anti-Constitutional Forces

America, We Remember Her Well

August 19, 2018: As you've probably heard by now, former Republican Steve Schmidt told Nicole Wallace that "America is headed for a constitutional crisis" under the 'leadership' of Donald Trump who appears to believe the mistaken notion that he is above the law. Plus, Mr. Trump definitely doesn't care to preserve, protect, or defend the US Constitution as he swore to do and his backers the Koch Brothers, along with Australian mogul Rupert Murdoch and other billionaires, are simply antsy to tinker under the hood of the venerable document with their anti-democratic "liberty" inclinations during a (sham) Constitutional Convention. Their sabotaging reforms would free the compromised Mr. Trump and others to subvert and weaken our nation even more easily than they already have which would clear the way for a 'new order' global government control grid of draconian proportions to complete its implementation--for which implementation America must be knocked from her throne as global leader.

In light of this crisis, a previous SO'W post grumpily attempted to make a big deal out of such threats to the America we've known and want to maintain by posting the horoscope of the upcoming Progressed New Moon (SP) of the US Constitution, a symbolic word picture representing a moment in time--the seeding of a new cycle of activity, or in this case, a new cycle of existence. Now operating within a darkened Balsamic phase of the Moon (a period when shady things can 'go bump in the night'), our Constitution is under assault by forces and entities such as Russia, China, and other actors hiding behind dark curtains--with Trump currently acting as their 'face', his 'MAGA" mask slipping a little every day to reveal the sabotaging smirk underneath.

Note that a horoscope of the Prenatal Solar Eclipse of the US Constitution is also shown in the above post but here I shall re-post below the horoscopes of the US Constitution itself (September 17, 1787) and its SP New Moon of November 5, 2018 which perfects one day before the 2018 Midterms. To me such cosmic synchronicity demonstrates another example among others of the importance of voting in the 2018 Midterm Elections for those of us who are determined to keep the US Constitution as-is without Trump-style anti-government types weakening its principles that America depends on. This suggests that it will be necessary for everyone to vote against all Republican candidates on November 6, 2018 although I don't prefer typing what seems to be a partisan message. However, the current American Crisis is that important so I'll do it for the Republic's sake.

Because after the Declaration of Independence was negotiated and partially signed, Benjamin Franklin is reputed to have answered a question from a man on the street, What kind of government do we have? "A Republic if you can keep it," Ben replied. Let's vote to keep it! 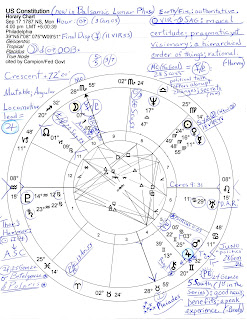 Note that the US Constitution actually came into effect on March 4, 1789.

Chart two shown below is the document's SP New Moon Horoscope of November 5, 2018 with the New Moon's Sabian Symbol of 'RESOLUTION': "A Battle Between the Swords and the Torches," a mysterious symbol which may have yet another meaning these days since white supremacists have famously marched with torches in hand. Yet 'lighted torches' are actually an Illuminati tell similar to the one held up by the Statue of Liberty (or 'eternal flames' at certain victims' grave sites)!

Now I wonder if our founding Illuminati-ists, Freemasons, and Rosicrucians would approve of the reforms the Kochs and other anarchists want to perpetrate upon the US Constitution as part of their authoritarian take-over of our country against any and all wishes of We The People? 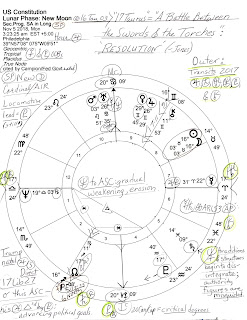 As you see, the planetary pair of Mercury and Neptune--here rising and setting in opposition--are prominent as they are in the natal chart of Donald Trump who was born with the thinking-tweeting planet Mercury and deceitful Neptune squaring one another, an aspect of "The Sneaky Mind" (Oken). This square, as previously discussed here and elsewhere, identifies Trump as an indiscreet, fantasy-prone fellow whose misconception of facts, off-kilter ideas about other people, and tendency to live in a fantasy world of his own creation aid him in the ruination of our nation.

So is it to be out with the old order of 1776, in with the new? Astrologically that's a Saturn-Uranus kind of thing! Then please keep an eye on the 'resolution' or proposed legislation introduced in Congress for a Constitutional Convention for they are dangerously close to success with calls coming from both Right and Left. Last I read, only 6 more states are needed to reach the 34-state minimum requirement. And let's not fall for the justification of 'strengthening' the document or otherwise 'improving' it for this is precisely the opposite of what the zealots intend.

Recommended Posts: Horoscope of The Syzygy (Full) Moon Prior to the 2018 Midterms and 'The Conspiracy Party' and Its Neptune in Pisces (talk about weakening!)