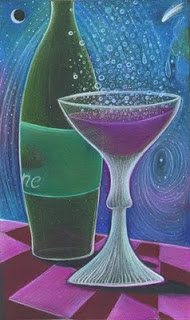 Tomorrow October 16, 2018, Stars Over Washington reaches its 13th anniversary! Beginning this blog using Astrology as a lens to investigate Politics and politicians on October 16, 2005, my frustration level with the Bush-Cheney regime and the rest of the Vulcan liars determined to scam the American people into war/s may not have decreased but it seemed a pretty good way to deal with my emotions at the time and blogging forward into 2018.

Sun Libra-Moon Aries is a lively, outspoken combination of a spunky crusader with aspirations for social harmony and justice. This blend is the natal blend of luminaries such as Coltrane, Fermi, Verdi, Pavarotti, and poet e.e. cummings whose sentiment I shared then (and now), "A politician is an arse upon which everyone has sat except a man." Maintaining a low opinion of most politicians as I do, having such a quote connected to SO'W was and is okay by me. And if you read the description of SO'W under its title, the infestation of corrupt politicians and their enablers has only increased under Donald Trump so more ridicule is needed, not less.

2018 Sun Libra-Moon Capricorn (conjunct Pluto!): a believer in fair play, law and order, and ethical systems (know how we can get one?), this is a purposeful, pragmatic blend with a social conscience and a sense of duty. (Please note that my personal sense of duty is for the sake of my country which is why for years I have written and published this 'freebie' blog.)

One luminary born under the auspices of this blend is Black Panther co-founder Bobby Seale and I close this celebratory post with his prescient quote which, in my opinion, must now be applied to all Americans as we face the 2018 Midterm Elections, said to be a referendum on the policies and anti-democratic 'leadership' of Donald Trump. According to Astrology, there is a distinct possibility of a Blue Wave which must be a Blue Tsunami in order to succeed against GOP cheaters:

"We must start coming forth with our energies...our intellects, and our abilities to see what is right and what must be done, so the suffering will stop, and the phrase 'life, liberty, and the pursuit of happiness' begins to make some human sense."

A Related Post: Defend the US Constitution on November 6, 2018!

Thank you for keeping us informed. I look forward to your posts. may you enjoy many blessings.

You guys are awesome! I've been gone a while and I didn't know you were still here! Cheers!!!