The Prenatal Eclipse of Inauguration 2021 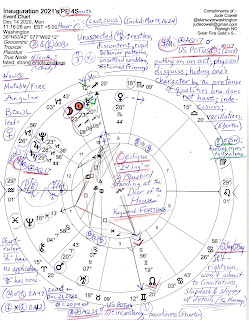 The heavyweight trio of Pluto, Jupiter, and Saturn in governmental Capricorn snug around the cusp of the 12th house (Politics, Self-Undoing; Large Institutions; Karma; The Unconscious; Secret Enemies) with Saturn strong in its own sign and at a critical-crisis 29th degree.

Also in 12th house is the Neptune-MC midpoint @00AQ17, the precise degree and minute of Inauguration 2017's POTUS Sun which creates a midpoint picture penned on the chart, upper right--someone is pretending to be what they are not. My suggestion: POTUS. Neptune-MC also conjoins the Pluto-Jupiter-Saturn trio which activates potentials for (more) criminal offenses, pursuit of peculiar objectives, gambling and speculation, putting all the eggs in one basket, insecurity, uncertainty, an inability to get over losses, and/or suffering from the consequences of wrong actions. The Neptune-MC pairing itself points toward crooks and swindlers (Ebertin) and deception, disguise, and/or fraud used in career matters and in public life.

Rising are two midpoints--Pluto-Chiron, one of the Plutocracy/Plutocrat pairings of exploitation, racism and various other -isms, plus, primal violence, and Mercury-Uranus which bestows someone with organizing talent, and the ability to act with prudence or deliberation.

Near MC is the transiting Mercury-South-Node conjunction which shows someone feeling mentally alone, whose ideas or communications are stolen (or, a plagiarist; emails hacked?), and/or, one whose ideas are ahead or behind the times.

As for the BOWL shape of planets led by Venus @28Sco44 in the 9th house of Foreign Lands, Philosophy, Higher Education, and Legal Affairs, the empty houses of the chart identify areas of challenge; a BOWL often indicates a mission to fulfill or a cause to advocate, plus, frustration, uncertainty, and/or vindictiveness that arises from a sense of division are possibilities of this particular 4 South Eclipse season. Here, evaluating Venus in Big Business Scorpio acts as the point of application (Jones).

Themes of a 4 South Solar Eclipse identify it as a difficult eclipse series which will affect or influence events and circumstances leading up to the January 20, 2021 Inauguration, the person who takes the Oath of Office, and thus the next administration to inhabit the White House. We may expect issues such as: "very strong emotional feelings concerning relationships and/or money", a sense of fatedness in relationships which are beyond personal control, a sudden desire to end relationships or alliances, blocked emotions that lead to "a great deal of frustration," and a need to "avoid taking rash action until things settle down" (Brady's Predictive Astrology).

Well, there are multiple other chart factors of note and I hope you'll ferret them out for yourself if you haven't already for a time of further turmoil approaches and we need all the fore-arming we can get.