May 15, 2019: As anyone who uses one of the various July 4, 1776 horoscopes to represent America knows, our national Mercury Rx in Cancer is opposed by Pluto Rx in Capricorn. In the 5:09 pm LMT chart, below, this opposition falls across the 2/8 axis with all the Taurus-Scorpio issues it brings. And of course, the Cancer-Capricorn axis relates to security, the domestic scene, nurturance, national issues including patriotism, public status concerns, and the Capricornian realms of business, law, and government. Besides obvious surveillance and spying issues, a Mercury-Pluto opposition tends toward potentials such as an obsession with social concerns and the responsibility for solving them, fear and anxiety, competence, impatience, and a habit of becoming arrogant when challenged lest America's credibility is being questioned.

Now this post is not about the May 18 2019 Full Moon @27Sco38, the 'flower moon', but its DC Horoscope is used, below, as a transit chart set around America's natal chart, the 5:09 pm version that I most frequently use. Outside the Full Moon chart are penned Trump's natal planets highlighted in a lovely shade of lavender. And as you see in US natal 6th house, transit ('tr') Mercury @24Tau24 conjoins Trump's natal Midheaven ('MC'), The Goal Point, so with the 6th house relating to military service (among other things), we could mention Trump's apparent tendency toward war with Iran (or Venezuela, or___). But we won't.

Other than to say that he seems to be following the Bush-Cheney playbook of re-election via the waging of war (under tutelage of warhawk John Bolton--him again), and of course, a war would serve Big T as yet another distraction from his political problems at home.

Here are the DC Horoscope/s in bi-wheel form with the main point of this post to follow: 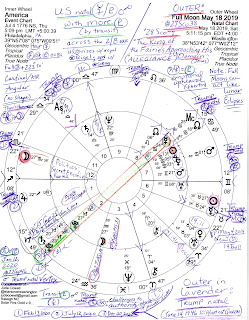 Highlighted in green: transit Pluto @23Cap00 Rx within orb of America's natal Pluto position (27Cap32) in natal 2nd house of the National Treasury opposite US Mercury @24Can11, with all three planets in retrograde motion. In 8th house of Corporatism, Big Business, Debt, and Transformation you see Trump's natal Saturn conjunct US natal Mercury, a cosmic picture of our depression, suppression, and the isolation of America he has caused. Schemes, criticism, and aggravating circumstances come along with this planetary connection as well and brings to mind Trump's 'trade war' with China and the harsh conditions it's causing or will cause our farmers and others.

Plus, Trump's natal Saturn conjunct US natal Mercury accounts in part for his limited popularity with the public while his Venus opposing US natal Pluto keys the constant emotional upsets (his and ours!) and his desire to force his and his donors' demands upon us. Trump's lack of trust in US systems and institutions is also suggested by the Venus-Pluto pairing as are organized crime, hidden wealth, and immorality.

Now it's true that multiple transits are in play right now yet the reason Mercury-Pluto with more Pluto (by transit) is highlighted here is the main point of this post. For that, I refer you to Michael Munkasey's Midoints: Unleashing the Power of the Planets for its Hegelian Thesis-Antithesis information concerning the Mercury-Pluto pair of energies within the realms of Politics and Business:

Add more Pluto to Mercury-Pluto and we have: "A ruthlessness when seeking whatever information you desire; increased needs to hide your actions and activities from others; increased likelihood of hearing depressing information; the end of discouraging information."

And that's the end of this post. Except to say that,

Stars Over Washington never asks for donations so Please Share this or another post if you appreciate!